Movie Review: The Lone Ranger is too inconsistent for two and half hours 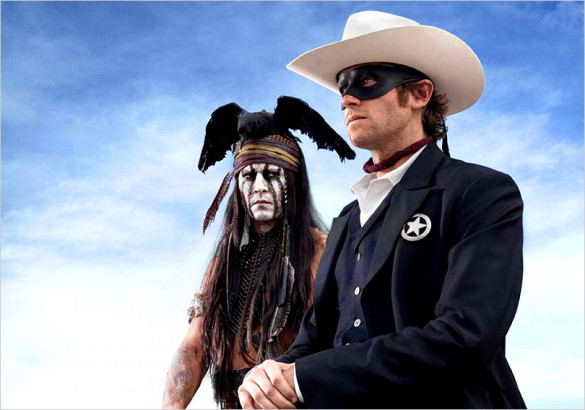 Synopsis: Native American warrior Tonto recounts the untold tales that transformed John Reid, a man of the law, into a legend of justice.

DIRECTION
Gore Verbinski once again teamed up with Johnny Depp to create an extremely long, action-filled (sort of) movie that is inconsistent at best. The script is pretty poor but Verbinski adds some great transition shots that include some beautiful visuals. While they aren’t all necessary and sometimes felt like Verbinski was caught up in the landscape, they were beautifully shot and edited. The action sequences aren’t as many as you’d think and they go way over the top. Realism was not a factor here but more like trying to have fun in a video game. You’ll always regenerate, right? For those that didn’t, it was a little violent for a Disney film that may throw off some folks but may make it more fun for others. The film was edited to be way too long and included an old Tonto (Depp) that was completely unnecessary. That being said, Verbinski is saved by an amazing ending sequence that includes an unbelievable score by Hans Zimmer that makes this film much better than it actually is. The final 20 minutes is crazily absurd but a lot of fun and extremely energetic. It’s easily the best part of the movie.

SCRIPT
The film opens with Tonto recalling his tales with John Reid (Armie Hammer) to a young kid who is dressed up as the Lone Ranger. All of that was unnecessary and should of been cut out of the film altogether. The story is all over the place and adds dialogue to characters that didn’t need it. Once the story starts to come together, it takes itself out and is forced to come back again. By the time Reid figures out who he’s supposed to be and what to do, it’s two hours into the movie and it becomes cluttered and clunky. There’s not tons of action here which means the movie rely’s heavily on the story and the characters to take it further. Speaking of, the characters aren’t well written and the Lone Ranger is more of a pacifist, who doesn’t feel like a hero but rather someone who doesn’t belong there at all. But there are pockets here and there throughout the movie that are great and well written which gets you into the story and what’s going on; and then they take you back out with scenes and stories that don’t need to be there. The ending sequence is fun though and it finishes off well which saves the movie. If the whole movie had been more tightened and focused like the final 30 minutes, the movie could have been really good.

PERFORMANCES
Armie Hammer doesn’t really deliver as the Lone Ranger and he made the character very unbelievable. Part of the problem is the script, but Hammer does things and says things that don’t say Ranger or hero in any way and it becomes very distracting. He brings some emotion to the character but overall he missed out on bringing our old hero back to life. Depp, or Captain Jack Sparrow, is back on the scene as Tonto who has his moments but overall falls mostly flat. However, Depp is very good in certain parts. He’s actually more serious in the role than you’d think and doesn’t bring a big comedic tone but rather is more the driver of the story. He brings little emotion as usual but has the right amount of presence to carry the movie, especially when it’s really dragging. William Fichtner stands out as the main villain here and is incredible. He’s one of the most underrated actors in Hollywood and he brings it here. It’s not an original character but for how it’s written, he’s incredibly engaging and believable. The rest of the cast is fine, while some of the characters don’t add anything, and they do enough to get you through two and half hours of inconsistency.

SCORE
OK, finally. The best part of the film. Hans Zimmer’s score is absolutely amazing. He uses a lot of brass instruments and brings a fair amount of western tones that fit the movie naturally. From beginning to end, the music is a carrier, especially through a couple of long transitional shots that are used as filler. The action sequences are incredibly lifted by Zimmer’s score and they add a lot to the environment and aesthetic of the film. But what lifts Zimmer’s score above all else is the final battle sequence that is his spin on the classic’s famous theme. It’s ten minutes of pure energy that goes on and one without slowing down and brings that action sequence to life. It’s fun, extremely engaging and it pulls you in to what’s going on and you forget that the action is a little absurd. The high energy pace along with the iconic theme screams The Lone Ranger and it absolutely saves this film from being complete misery. Amazing, amazing work here by Hans Zimmer.