Featured: Podcast Episode 19 explains why White House Down is better 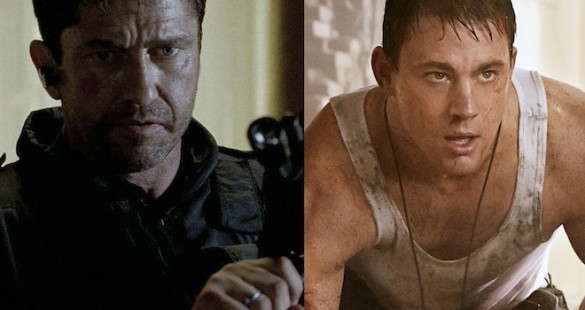 This last week on the InSession Film Podcast, Nate and I reviewed White House Down and we couldn’t help but compare it to Olympus Has Fallen. They literally has the same premise but take two very different approaches to it so we had to pick a winner. But Nate absolutely hated both of them and had a hard time deciding. As for me, the comparison is easily won by White House Down.

The chemistry between Jamie Foxx and Channing Tatum was funny and a lot more fun to see than Gerard Butler who was mostly by himself running through the White House. As a side note, Butler was good and one of the few things I enjoyed about OHF. However, Tatum brought his fun personality into the role and was able to bring the same (for the most part) fighter spirit which made WHD more fun overall. Both stories were absurd but the actual takeover in WHD is way more “plausible”, again I use that very loosely, and James Woods and Jason Clarke were a way better villain duo. The visuals in WHD are much better as well and it should as that is Roland Emmerich’s thing. The one shot of Washington D.C. in OHF after the plane crashes on the front lawn of the White House is so bad it looks like graphics from 1994 video games. The only thing I’d give OHF is the violence that Butler brings is pretty awesome. Both films are just average action films at best but if you’re going to pick one, White House Down has much more to offer in my opinion.

Take a listen to Nate and I discuss it in detail and let us know if you agree or disagree with our takes in the comment section below.