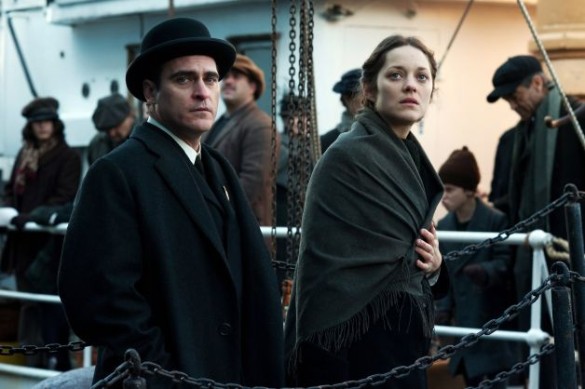 Synopsis: In 1921, unfortunate circumstances drive newly arrived immigrant Ewa into a life of prostitution, and a complex, volatile relationship with two men – her conflicted pimp and his romantic cousin.

DIRECTION
James Gray’s The Immigrant is visually beautiful, creating what appears to be a pseudo 1921 aesthetic full of dark colors that parallels the story presented here. Every shot is detailed and the camera work moves fluidly while being creative with his lighting choices. The last frame of the film is a fantastic money shot and it works extremely well…visually. However, the narrative that builds up to that moment isn’t quite as earned and reduces the potency it could’ve had. The premise of the story is a solid one but it feels as if Gray wasn’t sure what to do with the characters that was written for this film. He took the “Michael Bay” approach to this film; Focus on the visuals and let the characters and story come second. All in all though, not a terrible effort.

SCRIPT
The story begins with Ewa Cybulska (Marion Cotillard) and her sister Magda (Angela Sarafyan) in 1921, who have migrated to the United States from Poland looking for a new life. However, as they arrive at Customs, doctors hold Magda in quarantine, thinking she may have tuberculosis or some lung disease and have ordered Ewa to return to Poland. However, before she’s able to leave, she runs into Bruno Weiss (Joaquin Phoenix), who eventually pays off Customs police, so that she could stay with him in the U.S. illegally. Ewa eventually starts to work at the theater Bruno manages dancing provocatively and trying to earn a living. The theater is also a front for an illegal prostitution house, which Bruno forces Ewa into despite her resistance. You also see that it’s Bruno’s first choice either and inner conflict builds as he falls in love with Ewa. Ewa eventually meets Orlando the Magician (Jeremy Renner), who also falls in love with her and wants to give her a better life. As you can imagine, a three-way drama unfolds, which is intensified when you find out that Bruno and Orlando are cousins. The script’s premise is fine but the character’s lack the kind of emotional pull that this film really needed. The focus is lost toward the third act and some scenes even come off a bit goofy at times. The inner conflict of Ewa and Bruno is interesting but needed some further exploration.

PERFORMANCES
Marion Cotillard is incredible and nailed her character of Ewa. She’s scared and nervous, yet strong and motivated at the same time. Cotillard was able to navigate through her different languages fantastically and you believed every moment she was on screen. Phoenix was also great in his role, although it didn’t feel 1920’s but rather a great actor who’s fantastic at showcasing inner struggles and conflicts they may be going through. If there’s any criticism to Phoenix’s performance, it’s that it lacked the period piece aspect. Jeremy Renner on the other hand, is full out miscast for this role. He not only lacked the 1920’s aesthetic, but he wasn’t believable as this magician either. Renner is a great Hawkeye, and not to typecast him, but this isn’t him. The rest of the supporting cast is fine and work for the film as need be.

SCORE
Chris Spelman was nodded to score for The Immigrant, which is actually beautiful at times and adds some nice layers to the melodrama, which is a significant piece of the film. The score is as subtle as you’d want it to be here but absolutely serves the film okay enough.

FINAL THOUGHTS
The Immigrant features some great performances from Cottilard and Phoenix and the visuals are gorgeous, but it’s not enough to elevate this film to any significance due to a muddled and overly melodramatic script. And the miscasting of Renner is pretty distracting as well. Again, the inner conflict of these characters was compelling on the surface but needed further exploration for the conviction to really hit hard. The film just didn’t quite have the emotional potency it was going for.