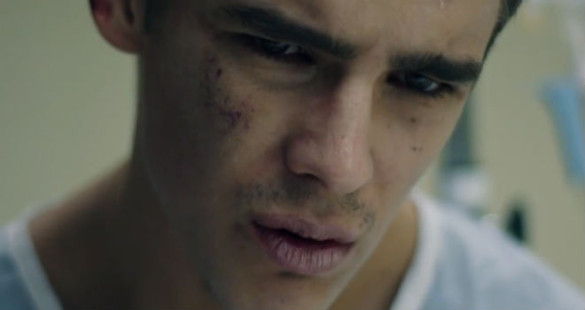 Synopsis: On a road trip, Nic and two friends are drawn to an isolated area by a computer genius. When everything suddenly goes dark, Nic regains consciousness – only to find himself in a waking nightmare.

DIRECTION
The Signal is a weird science-fiction story that was probably written backwards because the final shot is a thing of beauty and everything the film does is used to set up that moment no matter what. The way the film progresses, felt like writer-director William Eubank and co-writers Carlyle Eubank and David Frigerio, were struggling finding a way to get to the huge climax. The Signal leaves the viewer with two options: You can sit back and watch the story untold or you can try to solve the mystery before the characters do. Both viewpoints will leave you disappointed because the film takes a turn for the worse in the middle. Despite the stellar performances by Brenton Thwaites, Olivia Cooke, and Beau Knapp, I am afraid nothing could have saved the second phase of the film. However, the special effects in this movie somewhere have James Cameron smiling. This is clearly the best thing about the film. Every scene in The Signal is depicted well and will blow you away visually.

SCRIPT
The film begins with a road trip, following three college friends as they drive across the country to California. Haley (Olivia Cooke) is transferring to Caltech, a move that her boyfriend Nick (Brenton Thwaites), is choosing to read as a breakup. Nick has early stages of Multiple Sclerosis (MS) and becomes distant to Haley because he thinks she will breakup with him when his disease becomes worse. During the awkward pilgrimage, the students receive taunting texts from Nomad, a skilled hacker whose previous pranks nearly got them expelled from MIT. Jonah (Beau Knapp), the geeky third wheel along for the ride, traces the stranger’s IP address to a secluded outpost in Nevada. One detour and a close encounter later, right out of a Paranormal Activity scene, Nick wakes up to find himself in quarantine, the unwilling test subject of hazmat-wearing scientists. As things develop, Nick suspects that the mysterious leader Damon (Laurence Fishburne), is hiding something. Part of the fun in this film is letting the events play out on their own, so without going into any specific plot details, I will say that the writing trio does do a terrific job of keeping you interested through short but concrete narratives and stunning visuals and great acting. One of the best scenes in this film comes from a brief encounter with Lin Shaye’s character Mirabelle. One of the redeeming qualities of this film is the way the characters interact with each other because the movie offers large set designs with very few people in it so it is up to the actors to fill the empty spaces. If it was not for the way the story shifts in the middle, this could be an A film.

PERFORMANCES
If you do not know who Brenton Thwaities is, then you will after this year as he has five films coming up this year. Thwaities last seen briefly in Maleficient, was also the star opposite of Karen Gillian in Oculous. Thwaities is the main focus here as Nick Eastman and the results are for better than I expected. The beautiful Olivia Cooke who was the lone bright spot in The Quiet Ones, again did a stellar job here as Haley. Cooke has that natural ability to display her emotions through her eyes and body language. Laurence Fishburne as the lead researcher Damon, did a remarkable job shielding his motives behind an unnervingly ambivalent demeanor.

SCORE
Composer Nima Fakharara has a score that isn’t that memorable but it serves the intensity of the film and fills the space nicely. It’s never distracting and let’s your focus stay where it needs to be, especially if you’re working hard figuring out the narrative aspects.

FINAL THOUGHTS
If you want to watch a great movie this weekend, and it’s playing in your area, check out The Signal because it showcases brilliant young talent with a unique and engaging story.