Movie Review: The Hollars is a mixed bag of hits and misses 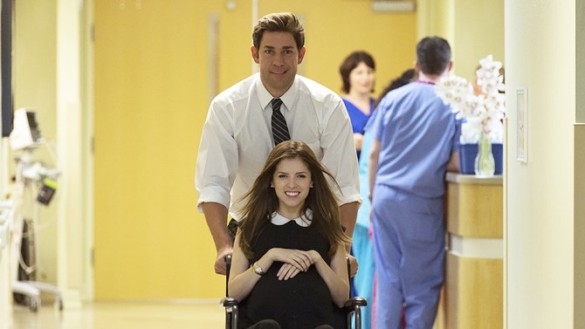 Synopsis: A man returns to his small hometown after learning that his mother has fallen ill and is about to undergo surgery.

Ever since 2005, John Krasinski has filled our hearts with joy. Seeing him play Jim Halpert on The Office just made the world fall head over heels in love with the american actor. But, like most up and coming actors, Krasinski wants to achieve a bit more with his career, broadening his horizons and expanding his knowledge on film. Krasinski begins this process with his first feature film The Hollars.

The Hollars stars Krasinski in the lead role, and he shares the screen with several other all star actors and actresses. The Hollars revolves around John Hollar (John Krasinski) who returns to his hometown to visit his mother Sally Hollar (Margo Martingale) after it is discovered that she has a brain tumor the size of a softball. John returns home to take a glorified walk down memory lane with his ex-lovers, brother, father, and even some new enemies that emerge.

The Hollars is a wonderful statement on the life of suburban families. Despite that the meaning of the film is incredibly joyous, the film has several flaws. First of all, the screenplay is horrendous. A good majority of the lines that characters say are pure exposition. They speak their thoughts with no hesitation at all proving that bad screenwriting can ruin an otherwise perfect film. The Hollars has a lot of potential, and several things about the film create exquisite emotion with the audience. Just, the characters speak in one of the most fake ways I’ve seen in a film.

Another poor aspect to the film is the characters. Krasinski and his screenwriter Jim Strouse do an excellent job at making sure each character has an arch. Every character learns something, and has discovered a new aspect of themselves by the end of the film, which is
satisfying, but we as an audience have no reason to care about the characters’ growth. The characters do grow and morph into people with new perspectives on life but that means nothing if I can’t care or love the character. Events just sort of occur in The Hollars, without giving us any connotation as to why we should care about these characters. So when poor things happen to the characters, no emotion is shared with the audience. It’s all just pointless interactions with pointless results.

However, the film does manage to give quite the underlying message that does stick with you quite well. Even though the events that occur carry no substance, the events do bring a perspective about life to light. The message being “things happen, death, heartbreak, realization that you won’t be with someone again, you are going to let people down, and you are not always going to get what you want, but that’s okay.” And this is a magnificent way to bring an element of lightheartedness to the smorgishboard of depression that is splattered throughout the film. The Hollars does not deliver in a lot of areas, but as far delivering a message and making the audience understand something about human life, it does achieve this immaculately.

As far as directing for Krasinski, this is not something to be ashamed of. Krasinski clearly has a vision as a director, and knows what he is doing behind the camera. He manages to create emotion and get emotion in the performance of his actors, which is the most stressful part of directing, and he nails it. This is not a bad debut, Krasinski fires on all cylinders as a director, and I would be more than willing to be that the reason that this film lacks in many other ares is because of the screenplay.

The Hollars is an insanely average film. A film that tries to be serious at times, but cannot help but be comedic, while also managing to deliver a powerful stroke of emotion through it’s subtext. The Hollars cannot decide what it wants to be, so the film leaves it up to the audience for how they perceive what they just watched. And for me, the screenplay is horrendous, the acting is top notch with an all star cast, and Krasinski need to get another shot at directing more films because he clearly has a vision that needs to be seen and recognized.