Movie Review (TIFF 2021): ‘The Good House’ Features a Dynamic Central Performance From Sigourney Weaver, But is Not Able to Escape Its Formulaic Trappings 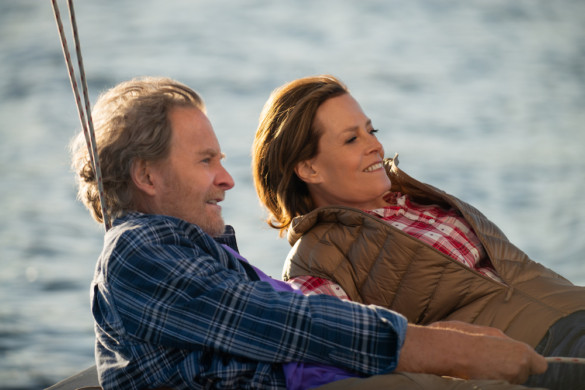 Synopsis: An alcoholic New England realtor tries to keep her life together while reuniting with an old flame.

The last time we saw Sigourney Weaver and Kevin Kline together on screen was in 1997’s The Ice Storm, director Ang Lee’s dark look at white, middle-class, suburban families in New England and how unhappy and imperfect they are, underneath their perfectly carved exteriors. Now, twenty-four years later, the two film legends are reunited again, at long last, in another film about repressed white New Englanders, but while The Good House is not as dark or cynical—or as good—as The Ice Storm, it still has just as much to say.

Weaver stars in The Good House as Hildy Good, the star realtor in her small coastal Massachusetts town. Hildy is going through a rough patch professionally, as her former assistant is stealing clients from her and sales are starting to dry up. Personally, she has never really recovered from her divorce and her two adult daughters don’t have much time for her as they are caught up in their own lives. But she can never let anyone see that her life is anything less than perfect, so she continues to put up the stoic and solid front that she’s put up her whole life, fooling everyone into thinking her life is perfect. But what people don’t know is that the only way Hildy can actually get through each day is by drowning in bottles of wine. She is in total denial that she has a problem, even after her family does an intervention and she goes off to rehab. All rehab does is force her to hide her drinking better.

Meanwhile, Hildy gets reacquainted with an old flame, played by Kevin Kline, but just as her love life and her work life are both finally starting to look up, her alcoholism finds a way to bring it all crashing down around her.

Directed by husband-and-wife team Maya Forbes and Wallace Wolodarsky, who also wrote the screenplay with Thomas Bezucha, based on the novel by Ann Leary, The Good House is generally a formulaic melodrama that gives us easily recognizable characters and follows a predictable path. Forbes and Wolodarsky have been able to find some interesting ways to infuse energy into an otherwise quite paint-by-numbers screenplay though, by giving Hildy a voice, literally, in the telling of her own story. They break the fourth wall early and often, allowing Hildy to speak directly to the camera, to let the audience know exactly what she’s thinking at that moment. It is very effective, especially when the main character is someone who is so protected and keeps the world at such a safe distance from her truths.

There is a stereotype of the “tough New England stock,” the stoic, stiff upper lip that gets passed down from generation to generation, a tradition borne out of history and weather—if you had to survive Nor’easters year after year, you’d toughen up, too. Hildy is very much carved from this tradition, so much so that she is a direct descendant of an accused Salem witch, a fact that everyone in town has fun with at parties. But, for Hildy, her toughness, her stoicism, and her strength are not only her familial inheritance but her obligation. She ridicules her artist daughter who shows her emotions on her sleeve by calling her a drama queen. Revealing to the world what she’s really feeling or going through is just not in her DNA. Letting her drop her curtain and speak directly to the audience, either literally or via voiceover, is a clever and insightful way to let the audience in and is what gives The Good House its best moments.

Those best moments are wholly because of Sigourney Weaver, an actress who has always epitomized class and professionalism and has never really been given a chance to drop her sophisticated allure like she does here. Weaver’s skillful restraint and natural abilities are perfectly at play here, as she relaxes and reveals only when she is ready to, a performer always in control, playing a character who must always stay in control. But Weaver’s best moments are when she loosens the reins and when Hildy cracks that perfect sheen and loses control, either happily to the sweet release of inhibition that wine allows her, or regretfully to blackouts and the demon of alcoholism that she so desperately tries to deny.

While most actresses may have chosen to amp up the drama in the most melodramatic scenes, going over the top and leaning into Hildy’s unraveling, Weaver instead loosens the grip just the right amount, picking the perfect moments for expressed emotions to hit home the hardest.

Unfortunately, Weaver’s pitch-perfect performance is the only real thing The Good House has going for it. Her central performance is the film’s key feature, but the film that is built around her is pretty standard formulaic fare, although the filmmakers should be applauded for not making the small-town characters and their personal dramas overly Hallmark Channel-ready. Still, there are weird tonal shifts throughout that attempt to keep us engaged with the secondary characters and their stories, but it’s all quite generic and bland, until a dark twist at the end that comes out of nowhere makes things really creepy.

As for Kline, he’s not exactly wasted, but his character is definitely a means to an end, which is disappointing. That being said, it is nice to have the tables turned a little bit, to see the male supporting character take a true backseat to the female lead, and to have her be the one with the complicated inner life, turmoil, and angst. It’s about time someone treated Kevin Kline as the boy toy.

While it is great to see Kline and Weaver together again, it’s too bad The Good House is the weakest of their three collaborations. Still, this film gives a meaty, adult, and meaningful role to a legendary older actress, and we all understand how few and far between these parts are, so, for all its weaknesses and uninspiring elements, The Good House at least gives us a complicated, pained, three-dimensional woman, struggling to find herself and refusing to deny herself happiness. The vehicle may be less than desired, but that message is certainly one worth driving home.