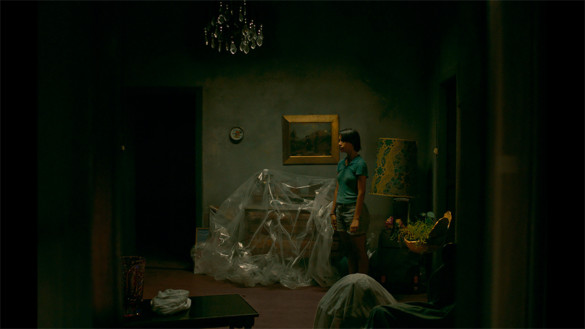 Having its world premiere at the 2021 Toronto International Film Festival, the Argentine film To Kill the Beast takes us into a surreal journey filled with evocative imagery under a gothic atmosphere. It’s an impressive feature film debut through which director Agustina San Martín channels a story of sexual awakening.

To Kill the Beast takes place in a small village near the border between Argentina and Brazil. Here, a recently arrived young woman will try to find her brother in an attempt to make peace with her past. However, roaming the village is a beast that, according to the locals, is attacking women.

To understand more about the artistic process behind To Kill the Beast, I had the chance to speak with Agustina San Martín about her fascination for the Gothic style, the sound design of the film, and her work with up-and-comer Tamara Rocca, who plays the main role.

Ricardo Gallegos: Why place this story on the border between Brazil and Argentina?

Agustina San Martín: Borders are a fascinating place for me. When there is no literal boundary — a wall, a fence, or something — it is a very nebulous place. On the border between Argentina and Brazil, people mix the language, they consume food from both cultures, television sometimes picks up the signal from Argentina and sometimes from Brazil. This undefined space seemed the perfect one to tell a story of a girl who starts to inhabit her sexuality.

RG: How was working with Tamara Rocca? What elements do you have to take care of with someone who is making her feature film debut? How did you guide her to effectively bring about the topics of sexual awakening?

ASM: Tamara hadn’t had leading roles in a movie, only small roles. However, she was a classical ballet dancer for large institutions from a very young age, so she’s always had a very artistic and performative relationship with her body. Even though she was 19 years old at the time of shooting To Kill the Beast, this relationship made everything a lot less invasive and more artistic for her. We were able to build everything in a much more choreographed way. We had a lot of communication. Luckily we became friends and that allowed us to communicate from a human side where we could talk about what was happening to the character: when to raise her voice and when to lower it.

RG: What was the work process behind the creation of the many Gothic landscapes? You used VFX and photography, but how did you interact with the artists to bring your vision to life?

ASM: Before shooting, I put together a PDF where I had screenshots of all the movies that interested me as influences. I made drawings of all the frames and then I added details for the memories. Based on that, I began to put together a map, scene by scene, of the memories that were going to be there and I started discussing them with the director of photography and the art director. We sat down to talk and it was a slow process. We were like scientists talking about all these abstract things. The same happened with María Peralta, who made the VFX: it was like a handmade, artisanal process because of the way we commissioned it all.

RG: Your filmography has gothic natural environments, jungles, and animals. Where does your fascination for these elements come from?

ASM: The Gothic fascination has to do with the fact that I was always very Gothic in my pre-adolescence: I painted everything in black. It was part of my identity, I was always a huge fan of horror movies.

Regarding animals, Lucrecia Martel once said in an interview something that I loved: “One never feels so naked as when an animal looks into your eyes.” There is a bit of that thing about animals that fascinates me because it delves into this pure and transcendental thought.

RG: What movies were your influences to create the Gothic environments of To Kill the Beast?

ASM: They are separate influences. There is some Carlos Reygadas. I mix a lot of David Lynch’s Twin Peaks too. Something that I always liked a lot was Bruno Dumont’s Hors Satan, which has the goth girl, a character who is genius. The Handmaiden by Park Chan-wook too. There are several people whose elements I found very fascinating and tried to capture with this film.

RG: From a moan to a branch crackling in the jungle, sound design is very important in this film. How did you use sound to amplify the storytelling?

ASM: I had already worked with sound designer Mercedes Gaviria on my last short film and we already understood each other very well, so we had a more advanced dialectic. Our quest was to make things as musical and fluid as possible. We looked for musicality in the creaking of the branches, in the wind, and in the water. With that in mind, we were trying to find some kind of soundtrack with ambient sounds. That was the main objective, a baroque soundscape filled with elements as if all we were listening to was the new world that the protagonist had just arrived at.

RG: How has the pandemic changed Argentine cinema? Has support been reduced? What’s the landscape?

ASM: It was already difficult before, now it is eighty times more difficult. Without a doubt, support was reduced. Nobody was working during the pandemic so everyone asked for the same funds and everything became much more competitive and inaccessible. On the other hand, we have the Film Institute (INCA) that more or less has to guarantee that you can access these funds. However, if they give it to you, it might take them 800 years to do so, and sometimes it isn’t enough because everything is already more expensive. We have tools, but between the Latin American economic crises and the pandemic, it’s difficult. Just finishing a movie is a heroic act.

To Kill a Beast had its world premiere at TIFF 2021 where it was screened as part of the Discovery program.