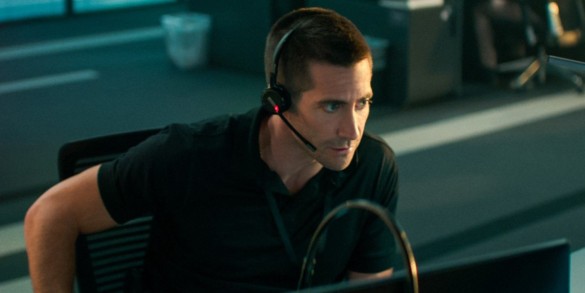 Synopsis: A demoted police officer assigned to a call dispatch desk is conflicted when he receives an emergency phone call from a kidnapped woman.

There have been numerous high-profile cases over the past few years of critically acclaimed international features having the rights bought to make an English remake. Take the last two Best International Feature winners for example, as remakes for Another Round and Parasite have both been announced, and both given the blessing by their respective directors. These headlines have pushed a narrative of how lazy the film industry is and how these films should not be rushed to get a remake simply because it is not in the English language.

The Guilty has had the same treatment here, in which a Danish film from 2018 has been Americanised and is ready to be pushed to the Netflix audience. However, this might just be a smart move when it comes to this film and the result is one that is certainly worth checking out.

What instantly sells this project is the cast that is attached to it. There are big names here such as Riley Keough, Paul Dano and Ethan Hawke, however, these are all simply voice performances. These actors can communicate this story just through their voices, and the performances are all so impactful. The film is led by one person in Jake Gyllenhaal, and as we all can expect from him, he gives one of the best performances of his career as Joe Baylor, a demoted police officer working at a call dispatch desk.

The reason this adaptation works incredibly well is how the story fits into the world-building. With the past year, in particular, highlighting the issues within the police system in America, this film has some great moments within the screenplay that highlight those issues within the country and do so in a way that helps drive the narrative forward. However, the film also runs into issues of being set in a place that makes the police system look good and does end the story on a note which may leave a sour taste in some people’s mouths.

Alongside that, there are certain moments within the screenplay that are written in order to build suspense but took me out of the story within itself. The way Joe Baylor acts as a call dispatcher, sometimes being aggressive to victims and even cutting off people just to focus on one task, made me feel very uncomfortable and disgusted. Whilst he does not care about the job and is just waiting to get back out as a police officer, there was a lack of professionalism in this film that just had me at disbelief and made it clear that this was purely a setting just so the film could happen.

This film follows a structure like that of 12 Angry Men, in which the entire film takes place in one location: the call dispatch desk. The audience does not get to see the incident that our victims are calling at, only using their voices to tell the story and to bring personality to these characters. This method is incredibly effective, as the audience is placed in the same situation as Joe Baylor and helps build the mystery within the story. Whilst I am not fully sure if the reveals in the story are all as effective as they should be, the film certainly kept me hooked for the entire runtime.

It was smart of Netflix to pick up this project, as I do see the film being streamed by millions of audience members. Whether you are aware of the Danish original or not, I would still recommend giving this adaptation a watch. Jake Gyllenhaal continues to show that he is one of the best actors working in the industry right now, and even with the tonal issues and the blunders at the end, there is plenty of things to enjoy and to keep yourself invested for a short runtime.