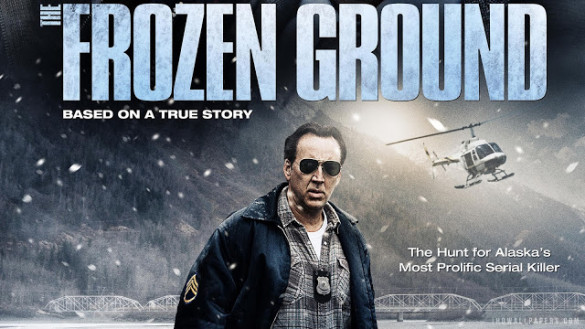 Synopsis: An Alaska State Trooper partners with a young woman who escaped the clutches of serial killer Robert Hansen to bring the murderer to justice. Based on actual events.

DIRECTION
Scott Walker in his full-length feature debut does a pretty good job bring a crime-drama thriller that is pretty engaging. While it’s a little monotone and slow-paced at times, other times are full of thrills and exciting moments. His camera captures the Alaskan aesthetic really well and sets up the environment well. Critics are often way too harsh on “originality, which is mostly dead, and criticize films for bringing nothing new to the table. While that plays a small role, it’s the journey to the end that critics, and fans a like, should focus on. In The Frozen Ground, there isn’t anything ground breaking about the genre, but Walker takes an interesting and tragic story and turns it into something very watchable. His biggest achievement though, getting the best performances from Nicholas Cage and John Cusack in quite some time.

SCRIPT
The story, based on true events, centers around a young female girl named Cindy (Vanessa Hudgens) who was raped and about to be killed when she escaped from her killer (John Cusack). Nicholas Cage’s character, Jack Halcombe who is an Alaskan State Trooper, is on the case of a serial killer when he comes across the account of Cindy, which he think is linked to the case. The story follows how Jack believes in Cindy and does everything he can to protect her and make her feel valuable amongst finding the killer. In the meantime, Robert Hansen (Cusack) is on the hunt for more girls when he realizes that Cindy is alive and can report him, which means he has to track her down before she can reveal him. The story goes back and forth for quite some time before the stories connect but once they do there is something there. The movie is a bit arduous at times with some torture-type scenes and the effects that this situation would have on a young female. Yes, it’s a story we’ve seen and heard before but it’s one worth telling. The ending pace becomes a little quick but in the end it’s still satisfying

PERFORMANCES
Yep, I can’t believe it. Nicholas Cage and John Cusack are at their best in quite sometime here. Cage needs to stick to subtle roles like this where he can fit in comfortably. If he’s going to get crazy, go back to The Rock days where it was great and a lot of fun. He plays his character pretty straight forward but you can see the passion and the committment he has here. Cusack in an actor who I never really care for (and is awful in Lee Daniels’ The Butler) but when given the villain role here, he’s actually (and surprisingly) good. Perhaps as someone I can’t stand, he seems to fit better as the bad guy. Hudgens is pretty good here and while she’s not as fun as her role in Spring Breakers, she shows some acting chops and does a good job. Everyone else is pretty good too. Given some of this cast, it’s surprising (good surprise) not distracting at all.

SCORE
Perhaps the only thing original about the movie is Lorne Balfe’s score but it’s also the most generic. Think about that for a second. It’s a thriller score if I’ve ever heard one and while it doesn’t sound bad, it’s not great either. However, it is in the background and in a thriller movie, if it’s not distracting then it works. And that’s really all that matters. Don’t expect any Oscar noms here.