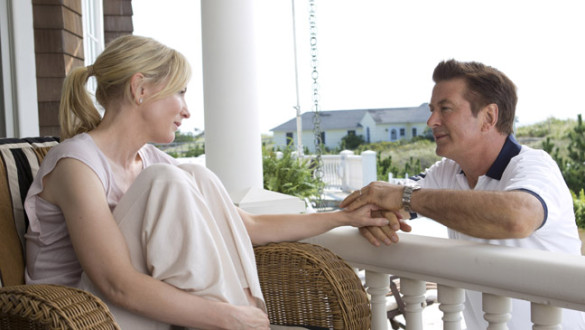 Synopsis: A life crisis causes a vapid and narcissistic socialite (Blanchette) to head to San Francisco, where she tries to reconnect with her sister.

DIRECTION
If you’re familiar with Woody Allen films, you’ll know exactly what to expect.  If not, you’ll be in for a treat.  That is not to say that all of Allen’s films are the same, but that they are all presented with the careful selection of camera angles and character moments that will stir the senses.  As you might already know, Allen is known for showcasing cities from all over the world.  From his early black-and-white film Manhattan (1970) to more recent offerings such as Vicky Cristina Barcelona (2008) and Midnight in Paris (2011), Allen might be the only director in the medium’s history to be able to capture spectacular views of the world’s most magnificent locations while also integrating an interesting storyline with star-studded casts which result in high praise and reward for the actors involved.  The level of respect that actors have for Allen surely do have something to do with the results.

So, with that said, what you get here is very similar.  This time though, we get two locales: New York & San Francisco.  The New York scenes center around life of the 1%; mansions, yachts, huge parties, and luxury-style everything.  The scenes in San Francisco, however, are quite the opposite.  Jasmine moves in with her sister, a grocery store clerk living in the Mission District of San Francisco with her two sons.   Having visited this area in 2011, I remembered visiting a lot of the areas they shot in.  A memorable wall mural featured in one of the early scenes fully captures the aesthetic of the neighborhood, inasmuch as a filmmaker can.  The actors all put in marvelous performances and create characters which are somewhat caricatures, but still very interesting and some even magnetic.  Woody continues to show that he can create a film as well as anyone in the world, and he has the skill-set and taste to know what will come across best on the silver screen.

Much like other characters that Allen has written in the past, Cate Blanchette’s Jasmine is very hard to love on a surface level.  Seeming to have everything that she ever wanted, viewers are positioned in a way that captures the extreme insecurity and neediness of this seemingly empty woman.  Her story seems frighteningly familiar: A beautiful young woman marries a rich man and creates a family, only to end up years later to realize her naivete.  Alec Baldwin plays Hal, the center of Jasmine’s world.  He is a smooth-talking, charismatic businessman that has climbed to the top of the mountain, and we are shown the extremely luxurious life he continues to provide for his family.  The movie effectively shifts between timelines giving us two stories that gradually connect (Jasmine’s NY and SF lives) the pieces of the story together.  The story is a great unfolding dramedy and will certainly be lauded as one of the year’s better films.

PERFORMANCES
Cate Blanchette puts in a performance here which is unmatched by any of her previous performances that I have seen.  Her timing in delivering lines is incredible, and the focus of the viewer is consistently on her at any moment she is in the frame.  Her control, versatility, and adaptability of different moods or faces she must get across are all excellent and the film would not work nearly as well without her effort.  Note that this is a testament to Blanchette, and not a knock to the rest of the cast or film, which makes her performance even that much more impressive.  This is a must-see performance.

The rest of the cast plays a much smaller role in the film, but all hit their marks and were able to convey what I’d imagine Allen intended each role to be.  From Alec Baldwin’s natural slickness in delivering lines to Bobby Cannavale’s rugged portrayal of Chili (the boyfriend of Jasmine’s sister Ginger), the performances are all spectacular.  The ability to convey personality in short amounts of time is something that is done so well in this film, and that is both from great direction and performance.  Peter Sarsgaard, Louis C.K., Andrew Dice Clay, and Sally Hawkins (Ginger) all are solid as well.  As you can tell, there’s no shortage of great acting here.

SCORE
The score was excellent and much like other Allen films, this incorporates an old bluesy sound as you hear things from Louis Armstrong to Lizzie Miles to King Oliver which sets the mood from scene-to-scene.  There are drifts away from this too, however, including more modern tracks from such unknowns as DJ Aljaro.  Overall, I felt it very appropriate and it kept me involved with the film in moments of transition and feeling.