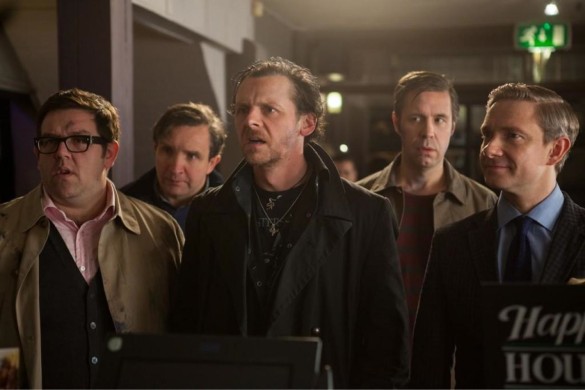 Synopsis: Five friends who reunite in an attempt to top their epic pub crawl from 20 years earlier unwittingly become humankind’s only hope for survival.

DIRECTION
Edgar Wright and company have ended the Cornetto trilogy in an amazing way with The World’s End. The camera work is very similar to Hot Fuzz and Shaun of the Dead and the style, as you could imagine, is pretty familiar. The formula Wright has perfected is a lot of fun and extremely refreshing. The satire and stereotypes is all here once again but is lifted up higher with a bigger theme. The aesthetic he creates is small town, relatable and by the end you want to create your own pub crawl. The visuals are great, especially toward the end, and the humor played on top of the visuals is even better. There are several fight scenes in this movie too, which honestly, are some of the better fight scenes we’ve seen all year. The music choices are fitting to the satire and the humor Wright is trying to create. If you like the first two in this trilogy, you’ll have no problem falling in love with the third film here. There’s some cameos and little details that are added to the film that make it fun. Wright knows what he’s doing with these films and he kills it once again.

SCRIPT
The story is centered around five friends who tried to do a 12-place pub crawl when they were 17 and we’re not able to finish but they had the time of their lives. Well now they are all grown up with families and jobs, except for our main anti-hero, Gary King, played by Simon Pegg. After a stint at rehab, he gets the gang back together to do the pub crawl once again with the end goal of reaching the pub, The World’s End. The script plays on the satire of robot/alien movies, similair to the satire of zombies movies in Shaun of the Dead and buddy cop films in Hot Fuzz, and it’s extremely well done. It’s funny, captivating and really brilliant. King has lost some touch of reality as drugs and alcohol have had their side effects which, of course, they play on that and the dynamics of his friends who are well off. Once the crew finds out the town has been overrun by something non-human, the movie turns a bit more serious, but the comedy never drops off. What separates this film, however, is the turn the third act takes when the film changes to a commentary on technology and humans reliance on it, which was unexpected, but always fitting and just added to the alien movie satire. The main themes were also unexpected and even more incredible. In all of the chaos around them, King and his friends realize that people, especially the one’s they love, are worth fighting for and you do whatever it takes to do that. It’s the way they are able to achieve it, especially in a comedic and fun way, that makes it simply incredible.

PERFORMANCES
All of the performances are fantastic. Simon Pegg and Nick Frost, who have carried this trilogy, are incredible and they know how to play off each other. The nostalgia factor that perhaps plays into their chemistry is challenged at the beginning which was a nice touch for these guys too. The characters they play are dramatically different too, to a certain degree anyway, given what we’ve seen from them in Shaun of the Dead and Hot Fuzz. You have to love Martin Freeman, who is amazing, as well as Paddy Considine and Eddie Marsan. Rosamund Pike, who isn’t in the film a ton, is good too and her character adds some motivation touches for some of our guys. The rest of the cast is fine and don’t distract or detract from the film at all. It’s what we’d expect from these guys.

SCORE
Steven Price does the score here and it’s pretty good. The action scenes are amped up and the pub aesthetic is exactly what they need. There’s even a little humor played into the score at times as well with what they were trying to do. The soundtrack music is also good and make this film a lot of fun. Go listen to the score and soundtrack.