Movie Review: ‘The Beach House’ is an essential chapter in the Eco-Horror canon 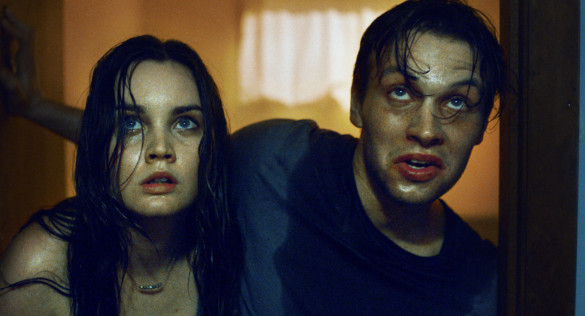 Synopsis: A romantic getaway for two troubled college sweethearts turns into a struggle for survival when unexpected guests – and the surrounding environment – exhibit signs of a mysterious infection.

“The oldest and strongest emotion of mankind is fear, and the oldest and strongest kind of fear is fear of the unknown.” This line attributed to hyper-problematic horror legend H.P. Lovecraft kept resurfacing in my mind as I watched The Beach House. The evil forces in many of Lovecraft’s stories originate from a place so far beyond humankind’s comprehension of the universe that no mere mortal can fathom them, supposedly. Lovecraft was so committed to this concept that he often refused to describe what his creatures looked like—absconding from his duties as the author of the damn story by convincing his audience that what they’re reading simply defies description, even claiming that just envisioning such monstrosities could literally drive one insane. A cop-out by today’s standards. But the dude got away with it, repeatedly. Over the years, his influence has bled through generations of horror writers, one of the latest being fledgling director Jeffrey A. Brown, who skillfully commandeers Lovecraft’s obsessions with uncanny terrors from unexplored realms and reframes them to form a modern “humans vs. nature” horror show.

Although The Beach House marks Brown’s directorial debut, he’s no stranger to the process of filmmaking. For nearly two decades, he worked as a location manager on several notable titles, and as a production assistant on several more for a few years before that. So, a rock star in two thankless yet absolutely pivotal departments that form the backbone of production, he certainly earned his stripes, as they say, leading up to this first time in the director’s chair. Locations folk (the ones worth their salt) possess a unique type of grit. They are always the first to arrive on set and the last to leave—so on a 12-hour shooting day, you’re looking at 14+ hours for locations. Seasoned locations crewpersons have a fortitude like you wouldn’t believe. And with all that endurance comes an understanding of what makes for a dynamic dramatic space, a place with levels and pockets for isolated action that is also conducive to filming.

The titular beach house and the surrounding areas make for a fantastic setting, as an idyllic backdrop of leisure living on the East Coast that slowly morphs into a place of unearthly, cosmic horror—a familiar set-up for Lovecraft stories. Just up the hill from the water, the views offer glimpses of breathtaking beauty, but there’s something foreboding about it all… With an opening aerial shot that dives beneath the surface of the shimmering ocean to become a Jaws-like underwater “tracking” shot that crescendos into an environmental disturbance of grand magnitude, Brown establishes that something is gravely wrong; something disturbing is lurking down below. To heighten the visuals, Brown and editor Aaron Crozier spliced in footage of real-life aquatic turmoil, courtesy of the National Oceanic and Atmospheric Administration. Kudos to this team for being able to pull that off, because practical imagery is always the best way to go.

In fact, The Beach House utilizes an admirable amount of practical effects as the horror mounts. Production designer Paul Rice has experience as a sculptor and as a puppeteer, so frankly I would have been disappointed if they had CGI’d everything. Rice, who also served as the film’s creature designer, rendered some lovely and ghastly looking beasts. The film wisely avoids going overboard in the creature department, though, by only showing us what we need to see, when we need to see it. (I’m sure that was for frugality reasons, too.) But at least Brown and Rice give us an impression of what these things look like—and clues as to what they do to their human victims. It gets grisly and occasionally grows hard to watch as the film veers into body horror territory. Perhaps the most cringe-inducing scene entails the removal of a parasitic annelid from a character’s foot. The special effects makeup is on point, and actress Liana Liberato sells it.

Liberato is a performer who I can see becoming a perennial casting choice among genre auteurs. Personally, I’d like to see her as a slasher film’s final girl. She is quite good here as Emily, a student studying to be an astrobiologist. Her Emily is a resourceful and knowledgeable protagonist. Thanks to her science-minded background and familiarity with the building blocks of life, the movie is able to give us just enough exposition to grasp what is about to unfold. Just enough. Because Brown withholds the majority of the information in order to keep the audience thinking and guessing. As a writer, you seldom want your audience to get ahead of you, and Brown assures that we won’t by confidently denying us the privilege of explication, almost entirely. So moviegoers expecting an answers-filled resolution will likely end up disappointed. On the other hand, moviegoers who welcome the opportunity to draw their own conclusions will likely enjoy letting the film assault them with its algae bloom from hell, or whatever the heck is going on…

Now is as appropriate a time as ever for ecological horror—because it’s only a matter of time before Mother Nature strikes back against us and saves what’s hers. Climate change is the biggest existential threat facing our planet right now. And we’re doing very little to quell it. The Great Barrier Reef is dying. And we’re doing very little to revive it. Whales and sharks are on the verge of extinction. And we’re doing very little to protect them. All of these issues are a result of man’s arrogance. And these actions will have dire consequences. To stick that point, writer-director Brown tore a page from H.P. Lovecraft’s book and summoned unfathomable forces from the depths of the ocean to wreak havoc upon the land-dwellers who knowingly and uncaringly put their own environment’s existence at risk in favor of their own selfish comfort. Makes you wonder who the real monsters are, huh? The Beach House is a commendable debut with a lot to unpack, and I’m eager to see what Jeffrey A. Brown does next.