Movie Review: That Awkward Moment is sadly nothing new 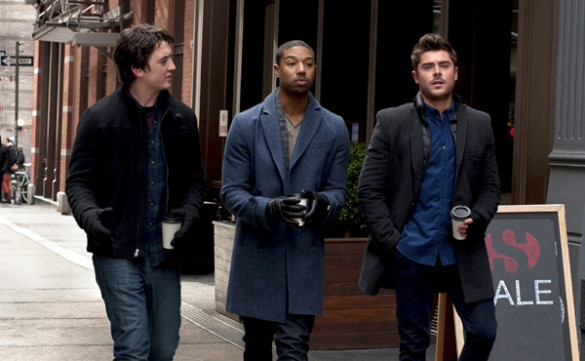 Synopsis: After their friend Mikey’s break-up, Jason and Daniel promise to stay single with him. However, they both end up falling in love thus affecting their promise.

DIRECTION
The beautiful thing about Love is that it is one of the few things that can break the Brotherhood amongst men. Newcomer Tom Gormican was faced with the challenge of seeing how three different types of men view women and the consequences of it. One thing that movies do that always makes me cringe is when films open up with the ending and then starts as a flashback. Gormican employs that same strategy and in this case it was not a plot giveaway. The film is structured like a typical love story but offers a bad balance of humor and realism. On the surface this movie looks like it well appeal to both men and women, but do not be fooled this film is more of a chick flick and it seemed like each male character is designed to appeal to a certain gender. The role of Daniel will appeal mainly to men as he is the comical one and more sex driven. Jason (the main character) will appeal to both genders equally as he plays a more balanced role. Mikey is the ideal “ladies man” as he is considered with reuniting with his wife and becomes Awkward around other women. Despite all this, Gormican does an excellent job of having the three different stories blend nicely with each other to provide a nice coherent movie. The problem that I have with the direction of the film is that it simply fails to keep your attention as it is repetitive for most of the movie and Michael B. Jordan should have stayed at Fruitvale Station because he was very out of the place in this film.

SCRIPT
The problem with doing a love film is doing something different because the audience already knows the love cycle where the guy finds a girl that will change his thought process, but falling in love is not for men. Guy eventually falls in love and messes up with girl and does some elaborate display of affection and the girl takes him back. That Awkward Moment sadly is set up exactly in this way and it attempts to fill in the missing pieces with humor. The first half was strong as we learn about how each male lead feels about relationships and women. The jokes worked well when introduced the first time. The middle of the film is when in my opinion the script went dry and become repetitive with the same poop jokes and characters doing the same thing day almost daily. Not sure if the bad script is a result of the dialogue or the subject matter. How was the dialogue you say? I’ll say this 2 Chainz could probably write better dialogues (not a good thing). The absolute best scene that is a perfect example of what not to write for any upcoming screenwriters is when Jacob (Zac Efron) and Ellie ( Imogen Poots) first meet in a bar.

PERFORMANCES
Miles Teller and Michael B. Jordan delivered homerun hitting performances in The Spectacular Now and Fruitvale Station respectively, so in this film their roles were not as great but they did the best with what they had. Zac Efron was the performance I wanted to see the most as I just remember him from the High School Musical series. Zac Efron played the role perfectly and he surprisingly has a comedic side (credit his next film The Neighbors?). The female leads all played wonderful roles as well. As well as the performances were it could save the awful script.

SCORE
The score was done by David Torn and is mostly just background noise that you won’t notice very much. For what it was though, it was okay. There was a couple of uses of soundtrack music as well but nothing is really stand out worthy. For the most part it fills the space but doesn’t add anything.

FINAL THOUGHTS
That Awkward Moment is a movie that will be enjoyed by few because the humor is nothing special and tells the same story we heard before. The nice thing about the film is that he does show us that Love can change a person for the better and shows us that being with the right person makes all your issues go away; and that you are happiest when you are together, however, all we have to do is search on Google and we will come to the same conclusion.