Movie Review: Spike Jonze visions a future with Her 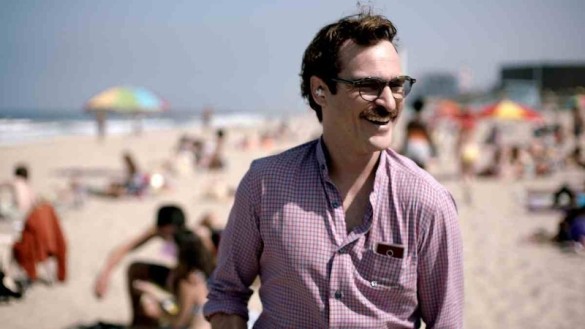 With movies such as Adaptation, Being John Malkovich, and Where the Wild Things Are in his rear view mirror, Spike Jonze continues to create and invent genre-bending films with Her, a movie about a guy in the not-so-distant-future who installs an “operating system” which he ends up falling in love with. The philosophical implications of the synopsis alone will generate discussion, but once having viewed this wonderful little film, it will be much more difficult to ignore the plausibility of such a fantasy coming true. Yes, artificial intelligence has a long way to go to get to where Theodore lives, but it’s not an impossible dream (or nightmare depending on your stance on the matter). Regarding the direction alone, Jonze puts Joaquin Phoenix’s talents on display with perfection, and not since Walk The Line has Phoenix seemed so masterful. The creativity involved in the visual intrigue alone would be enough for this film to be special, as Jonze really knows how to match color with feeling, and setting with atmospheric tone. Jonze is one of the great artists alive today, and this might be his best film to date.

The depth of the narrative drifts in and out of the techno-romantic fantastic, but overall the film entertains while still remaining provocative. Some cliche dialogue between primary characters holds the screenplay back from being the best of the year, but that is a very minor flaw in what is one of the most original and daring films of the year. The creative decisions to use voices without ever giving them faces, darkness without light, and retro set dress brings memories of 2001: A Space Odyssey. Philosophically, the films aren’t so different, and I don’t think it’s an injustice to compare the two. The consequences of our growing need for technology are becoming more apparent now than ever, and as we have all fallen in love with our favorite devices, Jonze uses that cultural reflection as the motivation behind the themes explored in Her. The challenges and rewards of a girlfriend in the cloud are acknowledged, and while Jonze may not have gone far enough into these for some, it was more intriguing to include many of them rather than extending far into a singular area. If this story doesn’t get you talking after the movie, nothing will.

Joaquin Phoenix is perceived by many as a Hollywood outcast of sorts, being somewhat reclusive and unpredictable in almost all aspects of socializing and promoting a film. With that said, perhaps his acting genius might be infected with boring mediocrity if he ever did try to fit in. I’ve never genuinely liked a character more than Theodore, a socially awkward and lonely writer who possesses a way with words. The way Phoenix speaks, moves, and stands in awe of the gigantic world before him resonates with the viewer, and alongside wonderful cinematography allows for us to get lost in the moment with Theodore. Charming, witty, and hopeful to a fault, Theodore provides a very accessible pathway to understanding how one might indeed fall in love with a computer. Speaking of Samantha, Scarlett Johansson’s voice acting might seem a bit normal at first, but the exercises she is put through deserve special recognition, and Johansson herself has always been undervalued as an actor due to her physical features. Other noteworthy performances are given by Amy Adams, Chris Pratt, Olivia Wilde, Rooney Mara, and a hilarious voice cameo by Kristen Wiig as Sexy Kitten. This is a full cast and they all add their own personal touches to what is one of my favorite films of the year.

Arcade Fire’s score for Her was one of my favorite, and feels as retro-futuristic as the rest of the film. Supersymmetry in particular is one of my favorite tracks in any trailer from this year. Karen O also provides some music for the film which appears in a trailer as well. I sincerely love this score.

Her is one of the most magnificent and stylized films of the year, and while some may be perturbed by the basic idea of this story, this is not a movie to skip this year–especially for those of us addicted to our devices (which is everyone nowadays, right?).