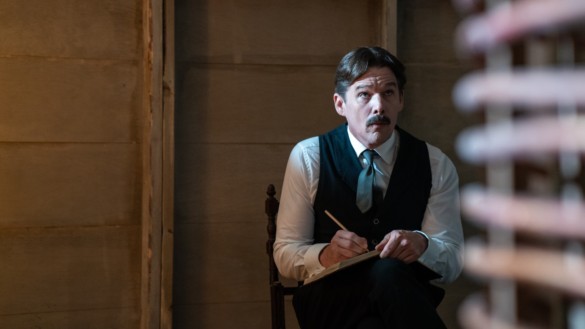 Look, let’s just get this out of the way. There is almost nothing tougher to make great than a biopic. Most of them are not memorable. Most of them are not terrible. The vast majority of them just sit there, like a side dish that you just can’t get excited about. It doesn’t disgust you, but your taste buds aren’t exactly jumping for joy. The best of them are big and broad; they cover more than life. Lawrence of Arabia and Malcolm X fit in that category. The other interesting biopics are because they glance off the full biography to tell a subtler story, like A Beautiful Day in the Neighborhood. Despite all of this, I was still excited about Tesla. Yes, a biopic but one about a primarily misunderstood figure and starring one of our best actors of the past two decades.

But, it is with great regret that I report that Tesla is just another forgettable biopic. It is neither good enough nor bad enough to be remembered for much even a few days later. But let’s start with the positives. Ok, a positive. Ethan Hawke is predictably good in the lead role. As expected, he is asked to do a lot, including a mild affectation to his voice, and to portray a complicated figure with little to no emotional material afforded by the script. But there is something just behind the eyes that lets us in. Hawke allows us inside of Tesla’s mind for the briefest of moments, and that is when it shines. Well that, and the much-discussed scene of him singing “Everybody Wants To Rule The World” by Tears For Fears. It’s as incredible as you’ve heard. Does it make a lick of sense in the way the movie is structured? Absolutely not. But honestly, I wish Tesla took more risks like this.

The creator of Tesla, writer/director Michael Almereyda, certainly thinks he’s making something risky and different. But frankly, Tesla is about as exciting as someone trying to recite a Wikipedia entry about the man half from memory, all the while checking their notes. And this is represented on screen, with our narrator talking about how many Google images of Tesla are on the search engine compared to other luminaries. Of course, the idea is that this great man and inventor should be remembered as more than just Edison-lite. But this message has been communicated better in films in which Tesla is a minor character, like The Prestige. Here, it feels as if we are spending about 100 minutes merely scratching the surface of who this man is. There is no depth afforded to him as the film leaps back and forth between vignettes and half-truths. This could be entertaining if done well, but only if.

Almereyda’s direction is one of the film’s most significant flaws in the entire picture. This should not be a massive surprise as, regardless of quality, his recent movies, including Marjorie Prime and Experimenter, haven’t been precisely awe-inspiring in their visuals. But when you have a polarizing figure like Tesla, combined with the obvious visual appeal of electricity in general, and the electric chair in specific, any director should be able to put an aesthetically noticeable stamp on someone like Tesla. But, the film being what it is, there isn’t a single shot that stands out above the rest. In that way, his direction is quite representative of the film as a whole. Not good, not bad, just serviceable at best.

One last diamond in the rough is Kyle MacLachlan, a pleasure to see on screen as always. In a reunion of Almereyda’s Hamlet, McLachlan portrays Tesla’s rival, Thomas Edison. MacLachlan relishes every opportunity to play the film’s villain. All of his precious few scenes, both real and imagined, almost make the movie worth the price of admission. I mean, how can you pass up a chance to see McLachlan and Hawke share not only the screen but also smash ice cream in each other’s faces. Yes, that happens. And no, no further context will be given.

So, is Tesla a bad movie? No, you can certainly do worse. Plus, accomplished actors Hawke and MacLachlan carry it across the mediocre finish line. Is it a good movie, though? Definitely not. It is stunningly without a singular above-average moment, outside of Ethan Hawke singing in full character. But, frankly, it is just not enough. It is more ill-conceived than most biopics but also lacks any character to make it memorable.