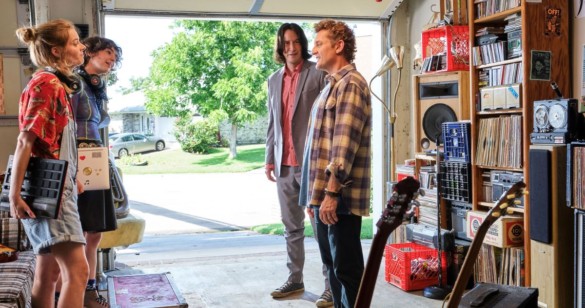 Synopsis: A visitor from the future tells best friends Bill and Ted that one of their songs can save life as we know it and bring harmony to the universe.

Sometimes, you see a movie at just the right time. Like it was meant to be. If you had told me that Bill & Ted Face The Music would be that movie for me in 2020, I do not think I would have believed you. But, as the film itself tells us, “sometimes, things don’t make sense until the end of the story.” Now, to be ultra honest about my biases, I am a big fan of the Bill and Ted movies, especially given that the first movie, Bill & Ted’s Excellent Adventure, was released in 1989 when I was ten years old. The perfect age for a stoner comedy without any actual drug use. Outside of a frankly dated slur, the movie is harmless, though my incessant rewatching might have caused harm to my parent’s sanity.

So let’s get the nonsense out of the way. No, it’s not a perfect movie. Yes, some of the special effects are genuinely awful. And a couple of the side characters (I’m looking at you weird murder robot) are a bit groan-worthy. But let’s be real. Did you expect incredible CGI? This is a movie that just barely got made in terms of time and money.

Bill & Ted Face The Music has a difficult task. It must not only tap into nostalgia after a tremendous gap of time but also build upon it. Oh, and it also has to end perfectly. After all, with your stars getting older (Keanu as a vampire, notwithstanding), they cannot simply stretch out the time travel aspect over more and more movies. But let’s take a moment to shine some light on our titular characters. Bill S. Preston (Alex Winter) and Ted Theodore Logan (Keanu Reeves) also have an incredibly difficult job in this third movie. They are, as always, basically positive characters that have a great attitude even in dire circumstances. But this time, it is a little different. Neither character is a young man anymore, and, as such, there are some pretty serious problems they have to deal with.

Always a team, both Bill and Ted, are struggling. They still haven’t written the song to unite humanity and create complete harmony, and time is running out. Ted, especially, is experiencing intense self-doubt and starts to wonder if they should just pack it in. After all, if you feel destined to create something great and have continually failed, how long do you keep trying? Bill is much more positive, but as the movie wears on, you can see the doubt increasing in him, as well. But, of course, even the serious subject matter is played with a knowing grin, and it is better for it.

One of the best choices the script makes, written by Ed Solomon and Chris Matheson, is splitting the movie into Bill and Ted’s journey and their daughter’s story. Thea (a delightful Samara Weaving) and Billie (Brigette Lundy-Paine, doing the best late 80’s Keanu impression imaginable) are honestly the movie’s two stars. Their journey to put together a band to help their dads manages to capture the original story of Excellent Adventure, while also expanding upon it and focusing on the music (as opposed to a history report). These two never miss a beat and get what a Bill and Ted movie is supposed to feel like.

Bill & Ted Face The Music is surprisingly about a lot of things, including legacy. It deftly examines the idea that our legacies are not just our own, but shared. We never genuinely do things on our own, in a vacuum. In Bill and Ted’s case, this involves their friends, like Death (William Sadler), their daughters as mentioned earlier, and their wives Elizabeth (Erinn Hayes) and Joanna (Jayma Mays). And it should be noted that they don’t do it on their own. They listen to their loved ones, almost all women, which leads them to where they need to be on that fateful day. The one male presenting character they deal with, in Death, leads to a problem, and it’s solved through non-stereotypical ways, like discussion and apology. Like most of the movie, the way it handles conflict is truly a breath of fresh air.

Without giving away the ending, it is basically flawless. These are silly comedies, always have been, so it was never going to be a simple end. As mentioned, the film tells us that it will all make sense when we get there, and although unpredictable, it works. This may seem like a strange comparison, but Bill & Ted Face The Music made me think of The Before Trilogy. Both series looks at a similar relationship, but with each entry, it’s a different lens because of the passage of time. A few years ago, when this was announced, many complained that we didn’t need another Bill and Ted movie. I am happy to report that they were wrong. Now, especially in 2020, a story of family, forgiveness, and connection is precisely what we need.