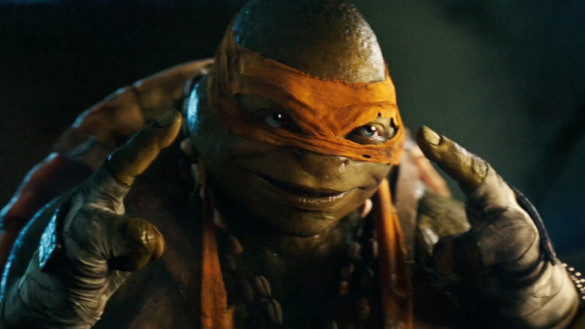 Synopsis: A group of mutated warriors face off against an evil kingpin who wants to take over New York.

DIRECTION
If I hear one more person say this is a Michael Bay film, my head may explode. For one, this movie is an hour and forty one minutes long. That’s the length of a Bay short film. Secondly, the one “glorification” shot in this movie is not even a second long and shows zero skin. Teenage Mutant Ninja Turtles is also a very family friendly film, definitely written for kids and most of it’s humor follows suit. Sure, you can definitely feel the Bay aesthetic a little bit, but it’s so miniscule and irrelevant in this film. TMNT‘s problem though isn’t Bay, but rather poor writing, poor acting and poor direction on Jonathan Liebesman part. The action beats are fun, along with some banter from the turtles themselves, but mostly Liebesman felt lost.

SCRIPT
The script is just plain awful. Now, I know this is “written for kids” but that doesn’t mean it gets a pass. The dialouge is terrible and the story lines are not very coherent. The “villains” of the movie are incredibly mishandled, with almost zero backstory or substance. The origins story has parts of it that is okay, as call-backs to original mythology that is updated for modern audiences, but it’s poorly executed. The turtles banter is mostly well done and they are easily the highlight of the film. The movie would’ve been great if we just the turtles hanging out for 90 minutes just arguing and fighting each other. However, the story meanders, doesn’t have enough development and is mostly a huge swing and a miss.

PERFORMANCES
You know a movie is bad when it makes good actors look terrible. Will Arnett is usually really great, however he’s mostly wasted in this movie. William Fichtner is amazing at being menacing, but in TMNT it’s very by the book. Megan Fox is…well…Megan Fox. She’s just not lead actress material. Even small roles like Whoopi Goldberg add nothing to the film. That being said, the turtles save this film ever so slightly and it’s because their banter is engaging. Noel Fisher as Michelangelo was pretty great and worked the best throughout the film. Jeremy Howard was a bit campy as Donatello but also worked well for the most. Alan Ritchson was superb as Raphael but the character isn’t as deep as other properties which was a bit disappointing but Ritchson was great in the role. As for Johnny Knoxville, he was okay as Leo, but his voice is terribly distracting. It’s not so much Knoxville’s fault as it is bad casting.

SCORE
Knock, Knock you about to get shell shocked! Hey, maybe it’s a bit cheesy but honestly, Juicy J and Wiz Khalifa’s Shell Shocked in the end credits is one of the best parts of the film. As for Brian Tyler, the score is okay but many of it’s themes and tones are re-hashed from his Thor: The Dark World score. It felt a bit lazy but at the same time, the music is still pretty descent.

FINAL THOUGHTS
If you want to see Teenage Mutant Ninja Turtles, go see the 1990 movie. This version of TMNT doesn’t quite have the heart or development that keeps you as engaged or entertained throughout. It does some parts well but mostly it falls flat.