Movie Review: Wish I Was Here 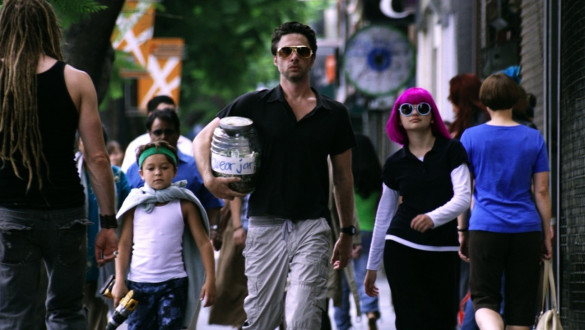 Synopsis: Aidan Bloom is a 35-year-old man who finds himself at major crossroads, which forces him to examine his life, his career, and his family.

DIRECTION
Zach Braff’s Wish I Was Here will feel familiar to those who saw his directorial debut film, Garden State, as this film also focuses on the hardships of life and the emotional poignancy that comes with it. The cinematography is gorgeous, well used and enhances the film a great deal. However, Braff’s editing is troubling here and unfortunately, too distracting at times. He’s forced to re-earn every emotional beat, which may work, but is unnecessary.

PERFORMANCES
Braff is wonderful in his role, making you feel his hurt and struggle as he must learn to find himself again. Braff has some wonderful moments with his kids, played by Joey King and Pierce Gagnon, which were incredibly endearing and fun to watch. Those scenes were also big bright spots in a film that dealt with mostly heavy material. King and Gagnon were just as fantastic too. Kate Hudson was terrific as Aiden’s wife and Josh Gad added a fun brother dynamic to Braff’s character, which will speak loud to a lot of people.

SCORE
The soundtrack isn’t as good as Garden State but it’s still pretty wonderful. Hozier, Paul Simon, Bon Iver and The Shins all make appearances on the soundtrack as well as several others to help add a strong layer to the film. They fill the music void extremely well and it’s a soundtrack you’ll want to check out.

FINAL THOUGHTS
Wish I Was Here is definitely a flawed film, but it’s themes are relevant and it’s emotional beats are still heartfelt. Sure, some of them may have to be re-earned, but if you can stick with it and try to stay engaged, it’s a wonderful experience that’s visually beautiful.