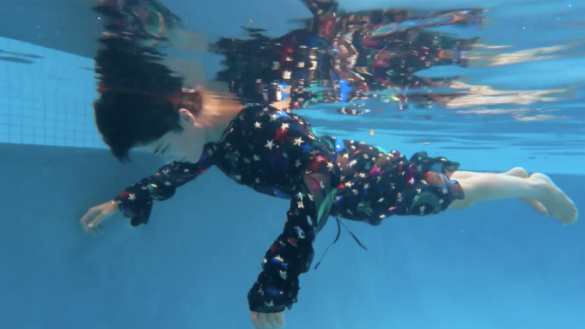 Synopsis: A deeply intimate and raw portrait of Selma Blair after she is diagnosed with Multiple Sclerosis and tries to slow the progression of her disease.

A rollercoaster of a journey through a debilitating illness Introducing, Selma Blair navigates the movie star coming to terms with her Multiple Sclerosis (MS) diagnosis, and then the grueling attempt to overcome it. Multiple Sclerosis is a rare auto-immune disease that attacks the nerves and brain, often causing pain, fatigue, vision loss, and loss of coordination. Selma Blair announced her diagnosis in 2018. She is most recognizable as the supporting star in popular films like Cruel Intentions (1999) and Legally Blonde (2001), but she is the lead here, telling her own story almost completely in her voice. Through cell phone diary videos, we see her most personal and vulnerable moments, otherwise, the camera acts as a spectator to her life and sometimes as a friend—she addresses the camera often, either explaining what is happening or using it as an ear to vent her struggles. This documentary captures the build up to her procedure of a stem cell transplant while along the way exploring her life, her relationship with herself, her son, and her mother.

Often times this is a very emotional watch, however, Selma’s charm and comedy offer many light moments. The film opens with her playing dress up, portraying the unforgettable Norma Desmond from Sunset Boulevard (1950), we witness her realization that she unknowingly bought a vibrator for her neck and face because she is often in pain in those areas, in addition to many other quick one-line laughable moments. In contrast, the devastating moments hit extremely hard. We witness her in real time go from having a normal conversation to completely unable to form a sentence, leaving her head in her hands from the overwhelming feelings and stress. We witness her break down emotionally at the realization of possible death, which brings out her concerns about her son, or who she will leave her horse to, or financial issues. At one point, Selma asks her son what he is most worried about with her procedure. He tells her he is scared about her losing her hair (from the chemo treatments) so her solution is to have him cut all her hair off, to lessen the shock. Selma just wants to be a good mom to her son. She recalls a bizarre panic attack she had on an airplane after drinking too much which catapulted her into sobriety.

Throughout the entirety of the story, the complicated relationship with her mother is weaved into explaining who Selma is and why she is this way. Selma remarks often about the negativity her mother imposed on her from childhood and throughout her career. We never physically see her mother in current times, though there are many flashbacks and photos of her—but we hear Selma on the phone with her. She admits to having a different understanding of her mother, now 81-years old and ill, often struggling to find her words. Selma admits her sisters cannot understand this, but because of Selma’s shared experience with this due to her MS, she has a new understanding of her mother.

The most moving moments are complete opposites. There was a moment after Selma’s announced diagnosis where she attends a red-carpet event. The overwhelming stimulation of the attention and cameras, caused her to break down. At this same moment, the cameras lowered. The photographers let her have her moment to collect herself instead of taking advantage of her, they were empathetic and understanding. The second moment happens after she has completed her treatment and is going to ride her horse for the first time in months. She is the happiest we have ever seen her. She looks healthy and incredibly joyful.

The documentary keeps its even pace by following the multiple-day treatment that Selma undergoes for this stem cell transplant, which she hopes will stall her symptoms and lessen the creation of new symptoms or lesions. There is a lot of appreciation for this part of the film, not only because we see real, raw moments of Selma where she is unrecognizable and in the worst pain, but because this is where you learn a lot about MS and this treatment from doctors and experts. This provides information and education for the audience, serving the genre for its intentions while still being entertaining and thought-provoking.

By the end of Selma’s story, we are at the start of COVID times. Selma’s mother has passed and she never got to say goodbye or give her mother the burial she would have wanted. Just as we saw in the open of the film, Selma begins to play dress up—not as a famous character, but as her mother, wearing a dress of hers that she always wanted but could never have, until now. Everything comes full circle for Selma and she understands that all of this is about facing reality and understanding that life is not about achieving certain things or obtaining happiness by chasing what thing you think will fulfill you. Humbling, vulnerable, tragic, and sometimes funny Introducing, Selma Blair will leave you in awe of what strength and maintaining positivity can do for overcoming an incurable illness.