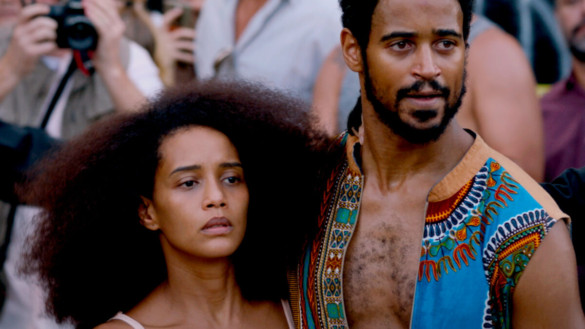 Synopsis: In a dystopian near future in Brazil, an authoritarian government orders all citizens of African descent to move to Africa – creating chaos, protests, and an underground resistance movement that inspires the nation.

Brazil’s history of racial injustice is harrowing. In 1888, it became the last country in America to abolish slavery without promoting any formal policy of inclusion. Later on, in the XX century, while they embraced the arrival of Europeans to “whiten” the Brazilian population, they also promoted the idea that Brazil was a “racial democracy” where racial discrimination was minimal.

Today, while around 56% of the population identifies as Black, their representation in the government is insignificant. Things became more worrisome with the arrival of President Jair Bolsonero in 2018, and just last year multiple cases of police brutality against Black people sparked social protests.

Taking this into consideration, the release of movies that exhibit this racism and social injustice – such as Executive Order – should be widely celebrated. For a country that is so racist – even though official sources constantly deny it – a time of reckoning is urgent. And while this film is deeply flawed, the conversation that inspires is important and worthy of attention.

Executive Order takes place in Brazil, in a future where an authoritarian government orders that all citizens of African descent move to Africa. While at the beginning it is promoted as a way of compensation for the years of slavery, the order quickly evolves into a mandate that provokes the persecution of Black people inside the country.

The story is presented through the eyes of Antônio (British-Brazilian Alfred Enoch), a lawyer deeply involved in the racial justice cause, and his wife, Capitu (Taís Araujo), a doctor in the local hospital. They are joined by Antônio’s cousin André (Seu Jorge), a short-tempered journalist that constantly questions the government without any regard for his safety. Inadvertently, they will become the face of the resistance once things become (more) critical.

It would seem that the ambitions of the story are too potent for the way they are presented on screen. Its shaky script with a basic development of its characters does not help either. Director Lázaro Ramos and his team of writers seem more interested in proving a point and exhibiting the vices of the society and government than on creating a cohesive story that is strong enough to carry its message. While the intentions are on the right place, and the plot of the movie is intriguing, its execution is defective. Even by its end, a definitive conclusion is completely lost in its political message.

Whether it is because of the presentation of the vague idea of forced migration to Africa – perpetuating the underestimation of that continent and its independent countries, as well as omitting the geopolitical issues that would arise –, or the excessive sentimentality that invades the second half of the movie, or the awkward inclusion of social media as a tool of change, Executive Order feels clumsy at best and poorly executed at worst.

In addition, the development of its characters is deeply shallow, leaving them in simple stereotypical profiles. While the actors are committed to their roles, their characters quickly become human outlines. This is more evident with the “bad guys”, who are so racist, determined, and callous that they do not seem to have any trait of humanity in them.

Executive Order could easily be included in the new wave of films that denounce the social injustices that shape our society. We had the Korean Parasite in 2019 and the Mexican New Order in 2020. This new Brazilian offer seems to be closer in quality to the latter rather than the former, which is a shame because it had the potential of being an impactful story with its awareness of racism, systemic discrimination, and police brutality in a country that makes massive efforts to minimize these problems.