Movie Review (SXSW) ‘I’m Fine (Thanks For Asking)’ Is Sweet, But Too Simple 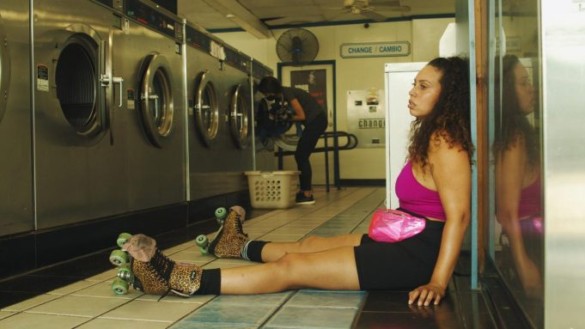 Synopsis: When a recently widowed mother becomes houseless, she convinces her 8-year-old daughter they are only camping for fun while working to get them off the streets.

Motherhood is a theme that is explored often in films in order to look at the strength of women and how they can or cannot care for their family. I’m Fine (Thanks For Asking) makes a mark with this theme, but ultimately cuts itself short on where it could have gone. The story is just too simple and it never explores the emotional weight it set itself up to look into with any depth. The film opens with a mother and daughter on what appears to be a camping trip. The camera dances over their campsite, showing us what they have, which is everything, because they are living here and hiding it from the world. Through a conversation between the mother, Danny (played by Kelley Kali, who also co-directed the film) and 8-year old daughter, Wes (Wesley Moss) it is revealed that Danny is widowed, her husband Sam, Wes’s father, is dead. Danny promises Wes that she will get them out of this tent and into a home soon.

The remainder of the narrative follows Danny as she skates around town, literally, trying to make ends meet to get them off the streets and into an actual home. When Danny drops off her daughter at daycare, she faces the babysitter who she is unable to pay because she is so close to having enough money for a down payment on an apartment. Before Danny leaves, though, she takes away the dirty teddy bear from her daughter, claiming it is too dirty for her to have to play with today and she ends up carrying the teddy bear in her fanny pack all day. Danny carries this weight of motherhood visibly with this stuffed animal, metaphorically in the same way she carried her child, like a kangaroo carries its young.

The struggle to find work during a pandemic is all too real for people across America, and frankly, the world, over the past year. However, COVID is not front facing in this narrative other than noticing the characters wearing masks on and off. Honestly, the story could have completely done without the masks and any connection to the pandemic. This is a story that is timeless and can always be told about being a single mother in America. Danny braids hair for women and is devastated when they are unable to pay after the work is done. She skates around town delivering food to people’s doorsteps, she attempts to sell her jewelry—but not the expensive jewelry of her and her husband’s wedding rings, trying to find any way to add up the dollars for the apartment the landlord is reserving for her only for one night.

Danny carries the story fully, facing conflict and infuriating moments along the way. She runs into a friend who gets her too high, she also connects with a friend who thinks can help get her back on her feet, offering a place for her and Wes to stay.  Moments later, he tries to force himself on her. She is almost killed by an intruder to her camp, which honestly completely comes out of nowhere but doesn’t quite stretch credulity.

Unfortunately, you leave the film feeling that you want more. For instance, we never learn about the father or what happened to him, because every time anyone brings him up, Danny awkwardly avoids talking about him or his death. While this is a believable reaction that could happen, and surely does happen, in real life—this story could have benefited by going there, exploring his death and the trauma that Danny and Wes now deal with because of it. By the end, though, Danny has fulfilled her mission to be a good mother to Wes, though. This simple, sweet story will leave you feeling warm but it is too forgettable to go anywhere past that.