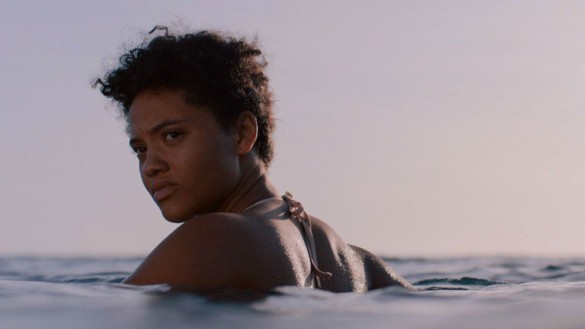 Synopsis: Jenn has washed ashore a small tropical island and it doesn’t take her long to realize she’s completely alone. She must spend her days not only surviving the elements, but must also fend off the malevolent force that comes out each night.

Kiersey Clemons starred in one of the best films of 2018. In Hearts Beat Loud, she gave one of the most overlooked performances of that year—and put her impressive vocal chops on full display. In that film, Clemons had the benefit of sharing most of her scenes with another actor, primarily Nick Offerman or Sasha Lane. Here in Sweetheart, however, Clemons is tasked with carrying almost the entire film on her own.

Her character Jenn washes up on the shore of a tropical island, shipwrecked, in the movie’s opening moments. Of course, being stranded on a desolate island comes with certain tribulations. Scavenging for drinkable water, hunting for food, constructing a shelter, building a fire, etc. Tom Hanks, Harrison Ford, Anne Heche, Brooke Shields, and even Madonna could tell you all about it. But none of them ever had to deal with a monster (unless you count Guy Ritchie).

Because—as if fighting off dehydration, starvation, and the elements weren’t enough—Jenn soon learns that an aquatic bipedal sea creature prowls the island for nourishment once night falls…

Director J.D. Dillard puts his faith in a solo Clemons to hold the narrative together, without the privilege of dialogue, for long spans of the picture. A truly versatile actor, she manages to convey so much of the story—and Jenn’s plight—tacitly with her body and face. Dillard’s direction is action-based and unassuming, allowing Clemons to stand out and repeatedly show that she is an absolute warrior whose range grows with each performance.

As a director, Dillard confidently drops his moviegoers right into the story—and provides zero flashbacks. He prefers to make Sweetheart all about his main character, and that’s where Clemons’ talent comes in. Thanks to her physical acting prowess, Dillard doesn’t need to include otherwise necessary exposition; this wouldn’t work with a lesser actor. In that way, Clemons is doing more audience-work than Dillard, whose presence behind the camera feels somewhat hands-off on occasion. Hints about Jenn’s pre-island life are sprinkled throughout, but for the most part Dillard instead trusts that the viewers will watch Clemons and instinctively go with her.

But then we witness our hero’s personal credibility—if what she’s seeing is true—unduly called into question, even though we and she have every empirical reason to know that the monster is entirely real. The subtext here is not exactly subtle, but maybe it shouldn’t be, for the folks who choose to reside in a bubble… In real life, the trustworthiness of women of color is frequently overshadowed by doubt. Firsthand accounts of sexual trauma, domestic abuse, police violence, workplace harassment, healthcare discrimination, micro-aggressions, and systematic prejudice regularly go unbelieved or brushed off as hyperbolic. The message lands in this horrific context, once again proving that horror is a perfect landscape for expressing social unrest.

Jenn is a survivor, utterly determined to live, despite the obstacles put in her path. She’s a young woman who has endured more hardship in two decades than many will experience in a lifetime. Her resilience matches her strength. She believes in her own skills and smarts—perhaps better than anyone she knows—because combatting this vicious humanoid ocean dweller is definitely not the first time Jenn’s vigor has been tested… but it just might be the last…

To be honest, Kiersey Clemons is the reason to watch Sweetheart. While there’s nothing blatantly bad about the filmmaking, it leaves a lot to be desired. J.D. Dillard handles this modest creature feature decently, sure. He gets the job done, and sells the important message adequately enough. But aside from two pretty killer revealing shots—keep your eyes peeled—the movie is not all that bold, directorially. It’s lean, like its amphibious predator, and resourceful, like its hero—a disadvantaged woman struggling to persevere in a place ruled by a beast whose dominance runs deep, if you catch my drift—but the film itself could’ve used more of an edge. Because once you carve out the lead performance and the central theme, Sweetheart is just your run-of-the-mill-sole-survivor-stranded-on-a-deserted-island-fending-off-a-carnivorous-aquatic-monster movie.