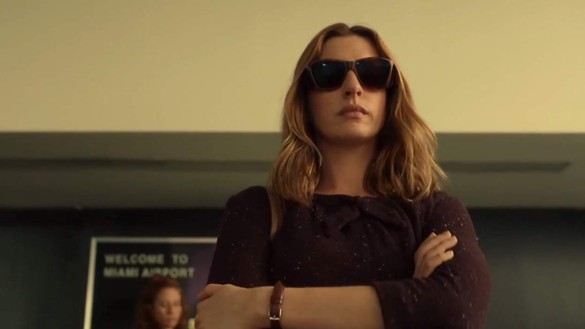 Synopsis: A veteran D.C. journalist loses the thread of her own narrative when a guilt-propelled errand for her father thrusts her from byline to unwitting subject in the very story she’s trying to break. Adapted from Joan Didion’s namesake novel.

The Last Thing He Wanted, by Dee Rees, is so disconnected from itself that it feels like a cluttering of scenes and sequences held together by little more than adequate performances and missed opportunities.  The Last Thing He Wanted never really comes together, so throughout the course of the film the tenuous threads of narrative are held together so loosely that oftentimes one is bewildered and irritated by the lack of cohesion.

in The Last Thing He Wanted, based on Joan Didion’s novel, Anne Hathaway plays Elena McMahon, an investigative journalist following hot scoops regarding arms deals while covering Reagan’s presidential campaign in 1984.  Soon, her estranged father (Willem Dafoe) appears, speaking riddles about army surplus guns and a big new deal in which he is involved. Elena quickly finds herself embroiled in an arms sale as both a participant and a journalist.  During her investigations, she comes into contact with CIA operative Treat Morrison (Ben Affleck) and finds herself deeper and deeper in the very story that has consumed her.

From the start, The Last Thing He Wanted fails to build any sort of narrative foundation.  The audience is keyed into guerrilla fighters and covert government bureaucrats, but nothing is ever shown or explained.  The entire first third of the film is filled with hints and glimpses but there is no solid exposition. Once the plot supposedly thickens, one is left wondering who the players are and why on earth we should be intrigued by this story.  Elena’s jet-setting and clandestine meetings do little to progress the story. With each new face we meet, more questions arise. With every character that is introduced, there is no explanation as to who they are, where they are, or what their role in the story happens to be.  The confusion just mounts as Elena gets deeper and deeper into the plot.

As the film progresses, Elena’s character begins to lose focus.  It is not that she is making different decisions and upending audience expectations, which would be welcomed and thought-provoking.  The focus is lost in that the filmmakers seem to forget what her storyline entails. They haphazardly insert phone calls with her colleague (Rosie Perez) and her daughter (Onata Aprile) as to only remind the audience that she has a job and a family.  None of it fits the narrative, as one finds themselves just plain wondering what the heck is going on.

The actors themselves seem to have put their performances on auto-pilot.  Dafoe plays unstable well and that’s all he does. Hathaway hits her marks, weeps in close-up, and talks on the phone…a lot.  Affleck broods and delivers lines like he is waiting for the check to clear. If their characters were better written and more well-rounded, perhaps their performances would have resonated more, lifting this film into something more narratively cohesive.  However, the lack of a firm story and poor character development leaves them out on a limb, hoping the branch won’t snap below them.

All in all, The Last Thing He Wanted lacks enough substance to become enjoyable.  Tensions are never properly set up and characters don’t even seem to be living in the world that is created.  This disconnect between every aspect of the film works against itself right from the opening sequence. The locations are beautiful and some of the smaller parts are well acted (Edi Gathegi & Mel Rodriguez); however, nothing comes together and a lot of talent seems to be wasted.