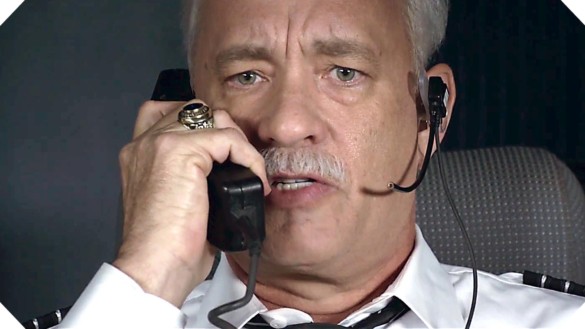 Synopsis: The story of Chesley Sullenberger, who became a hero after gliding his plane along the water in the Hudson River, saving all of the airplane flights 155 crew and passengers.

On January 15, 2009, a familiar scene brought an uneasy feeling to the people of New York. It was on that frigid day that US Airways Flight 1549 makes an emergency landing in the Hudson River after striking a flock of geese. Capt. Chesley “Sully” Sullenberger (Tom Hanks) was the pilot that made the life-saving choice to attempt that landing and miraculously, all the 155 passengers and crew survive the harrowing ordeal. Is Sully a hero or could that whole incident have been avoided? Sully is directed by Clint Eastwood and stars Tom Hanks and Aaron Eckhart.

Saving the lives of 155 people is a heroic act and for anyone on the outside, there is no question that what Sully did was nothing short of fantastic. Sully focuses not on the known but rather the investigation into Capt. Sully and First Officer Jeffery “Jeff” Skiles (Aaron Eckhart). I personally didn’t know that there was any controversy regarding this situation because of the Miracle on the Hudson.

Without diving into spoilers, it’s evident that Eastwood knows how to shift perspectives because at times I found myself questioning briefly if Sully made the right decision. The NTSB (National Transportation Safety Board) investigators led by Charles Porter (Mike O’Malley) ask very tough questions about Sully’s personal life and rather he was going through issues at the time of his flight.

The camera shots in Sully have beautifully positioned angles when the airplane is in the frigid river that gives you different perspectives as well. Having these varying shots of the airplane on the river makes you appreciate the impressive rescue even more. A sense of realism helps strike that emotional chord with you during the entire duration of the flight from take-off to the abrupt landing.

Tom Hanks has been in similar roles before where he is facing high-tense situations and again he nails his role to perfection. Aaron Eckhart adds great support as First officer Jeff Skiles.

There is no doubt that Sully sticks its landing, but it loses points for me in a few areas. Eastwood uses various flashbacks, with two of them feeling a bit incoherent due to their timing, which throws off the pacing of the film slightly. The biggest issue, however, is the portrayal of the NTSB. The film makes it seem like they were trying to devalue what Capt. Sully did when in reality that was not the case. The investigation was just a standard procedure and the hard questioning is necessary when it involves safety. I’m afraid that when people watch this film, they are going to get the wrong idea about what the NTSB does and I do not want that to happen.

Sully nevertheless is a fantastic film that gives us the insight into the events surrounding the Miracle on the Hudson.

Hear our podcast review on Episode 186: