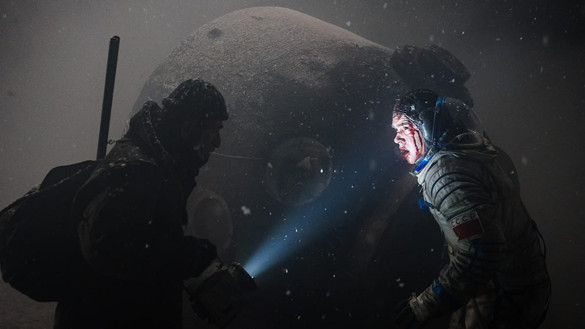 Synopsis: The lone survivor of an enigmatic spaceship incident hasn’t returned back home alone-hiding inside his body is a dangerous creature.

Leave it to the Russians to utilize Cold War-era cosmonauts and a parasitic alien to craft what will perhaps end up as one of the year’s most riveting morality tales about the monstrous side of human nature. Sputnik does not wear its themes on its sleeve, nor does it present its philosophy on a platter; it’s first and foremost an outstanding sci-fi horror flick. This is what excellent genre filmmaking does: it bewitches the audience with a mystery, then tickles them with some thrills, and finally gives them a little gore—then let them unpack any of the veiled notions they identify if they so choose. For many, Sputnik will be a highly entertaining creature feature, and that’s fine. For those who like a movie with layers to peel back, this one’s got a few. It didn’t invent using an otherworldly entity to explore the darker corners of inhumanity, but it’s still a fairly well-engineered film.

Picture it! Soviet Kazakhstan, 1983. The space race is over, and the Cold War is nearing its climax. The Soviet Union is steadily crumbling, though their military bases continue to host highly classified laboratory investigations. The latest and most top-secret case concerns a pair of cosmonauts who crash-landed back on Earth after what was supposed to be a routine space mission. Cosmonauts Konstantin and Kirill went up alone and healthy, but they returned blood-soaked and with a mysterious organism in tow. The lab’s on-site physician is having difficulty treating Konstantin, so a colonel recruits Tatyana Klimova, a psychologist with a dubious background and unorthodox methods, to diagnose the situation. What at first seems to Tatyana like a bad case of PTSD soon proves to be something much more horrifying once she observes what happens to his body as he sleeps.

Oksana Akinshina’s Tatyana has a resolute fortitude about her. Outside of her psycho-pathologist role at this facility, Tatyana is a bit shadowy. We’re told upfront that her controversial tactics almost killed a previous patient—from a screenwriting perspective, that’s a hell of a way to have your main character “pet the dog”—and I admire how Akinshina never uses that to panders for the audience’s sympathy. Tatyana has a no-nonsense demeanor with a convergent mind, two qualities that make for a driven protagonist. But she’s also a person who puts up barriers, making her difficult to read. For some actors, this can result in a flat performance, but Akinshina imbues the character with a simmering ego-less passion for solving issues of the mind and body; therefore, she manages to carry the story.

Pyotr Fyodorov’s Konstantin, too, hooks the audience. You could say he’s the more human of the two leads. We’re told much more about his past and the concern he feels for his solitary mother. We also witness the remorse he feels for deserting his son in favor of becoming a cosmonaut and a national hero. Actually, the fact that he’s a hero is brought up… a lot. It’s almost like it’s… emblematic of something. The symbiotic relationship between a nationalistic population and their national star? The way one cannot exist without the other? The way each feeds off the other? Whatever it is, this actor has more context clues and ideas to play with. And each revelation about Konstantin that Tatyana uncovers reveals nuances to Fyodorov’s performance that may have gone unnoticed before.

Maybe the most intriguing character in the film, though, is the alien. Many monster movies choose to show as little of their creature as possible, whether for budgetary reasons or artistic purposes. Sputnik, however, puts the alien front and center. And gives it a pretty memorable entrance, to boot! The design is marvelous. Frightening yet strangely elegant in its own big-slimy-cobra-with-skinny-appendages-and-too-many-tiny-eyes kind of way. More character development is devoted to the alien than expected, and the film is genuinely better for it.

Sputnik is just shy of two hours, and the first two-thirds are pretty spellbinding. The final act of the film forgoes its sense of intrigue in exchange for balls-to-the-wall, cat-and-mouse action that, while a natural place for the story to go, doesn’t quite land. But maybe the thrills wouldn’t feel quite so lackluster if not for such a poor attempt at having a twist ending for the sake of having one. As a reveal (?), it’s honestly more perplexing than insightful. Furthermore, in addition to being uninspiring, it’s unnecessary. Since it adds virtually nothing of substance to the narrative, I’m puzzled as to why director Egor Abramenko decided to include it. I gather he’s not a script guy. Abramenko’s strengths lie within the visuals. The sets and costumes, fabulous. The moody lighting, striking. The visual effects, stunning. Everything we see on camera comes together seamlessly. So even if Sputnik lags in its last few minutes, it’s still a solid genre picture that will scratch a particular itch for fans of extraterrestrial horror.