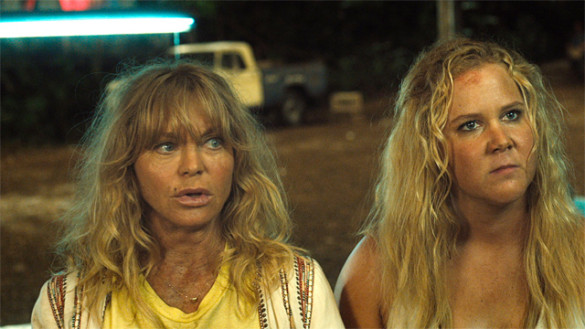 Synopsis: When her boyfriend dumps her before their exotic vacation, a young woman persuades her ultra-cautious mother to travel with her to paradise, with unexpected results.

Before my screening of Snatched, Stars Goldie Hawn and Amy Schumer introduced the movie and Schumer said that we are watching this movie in the best way possible on the big screen. I do agree, but I would like to add one thing, and that is the word FREE. If you had to pick between watching this movie free on a Sprint phone on 2G and paying to watch it on the big screen, it is the only time I would say go with Sprint.

I will keep jokes to a minimum, but the only way to react to Snatched is by laughing at its extremely poor quality. Speaking of laughter though, the comedy here is hit or miss at best. Fan or not of Schumer, she is incredibly over-the-top in and tries way too hard to be funny. Schumer plays Emily Middleton, a self-centered character that is rather annoying and leaves a lot to be desired. After a break-up, she needs somebody to travel to Ecuador with her, so she invites her mom, Linda (Goldie Hawn). Goldie Hawn makes her return to the big screen after nearly 14 years away and I’m not sure exactly what drew her to this movie – because it is a trainwreck – all pun intended.

The theme of 2017 is bad editing, and since Amy Schumer’s footprint is on this, naturally it copies that trend. The narrative is disjointed as a result and some character choices are odd, even for a comedy of this type. The kidnapping trope thinks its funny than it actually is, and leads to unique situations that tries to force laughs, but the film’s editing and lazy screenplay conjures unbelievable scenes that lack coherency. We never find out why Emily and Linda are being kidnapped. For a slapstick comedy, plot doesn’t have to be the be all end all, but some narrative backbone would give strength to the film’s humor.

The script by Katie Dippold and the direction by Johnathan Devine are weighed heavily on the two leads, and neither can carry the film. The supporting cast, which includes Wanda Skyes, Joan Cusack, Ike Barinholtz, and Christopher Meloni each outperform Hawn and Schumer. The best moments of Snatched come in the form of banter between Ike Barinholtz’s character and a US Agent.

Comedy is arguably the most subjective of all art, but this film’s failures isn’t simply about it being funny or not. The filmmaking as a whole is a meandering mess. Not even baby Groot could save this movie. If you love your mother, please do not take here to see this atrocity this weekend.