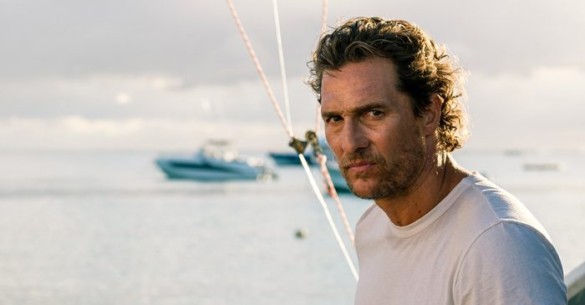 Synopsis: The mysterious past of a fishing boat captain comes back to haunt him, when his ex-wife tracks him down with a desperate plea for help, ensnaring his life in a new reality that may not be all that it seems.

When making a mystery, it can be difficult to stick the landing. An interesting premise can lead you to sit down and give a movie a shot, but it is the twist or surprises within the film that can make you question why you sat down in the theater once the credits start rolling. Thus when I went to go see Steven Knight’s newest neo-noir mystery thriller Serenity, I had already heard that this movie was going to be something you weren’t going to forget for a long time and once this movie was done, I agreed that this was something that I would never forget but not in a good way. And from accounts, Serenity is at times a captivating, entertaining film that turns into a nonsensical mess by the end leaving your empty and questioning every aspect that went into the decision making process in creating this story.

The film follows Baker Dill (Matthew McConaughey), a captain of a fishing that takes tourist out on his boat to go a fish. Baker is a troubled man that is trying to forget about his past while becoming obsessed with catching this big tuna fish that he has named “Justice.” He is also a man of repetition, continuing to do the same thing every day, hoping that the outcome is different so he can finally catch that fish that is haunting his dream. But this obsession is more than just about catching a fish, it is about escaping the family that has left him and that he has left, for reasons that we never find out. He has his first mate Duke (Djimon Hounsou), who he has a mixed relationship with considering he blames him for his bad fortune in never being able to catch Justice and thus when he runs out of money for gas for his boat, he runs to Constance (Diane Lane) is obliged to give him money for sexual favors. Everything is going along as they always go for Baker till his ex-wife Karen (Anne Hathaway) returns into his life one night, asking him to do something for her that will change both of their lives. Karen asks Baker to kill her new husband Frank (Jason Clarke), the man that she left Baker for and is now physically abusing both Karen and their son Patrick (Rafael Saige). If Baker takes Frank out of his boat, kills him, and rids that man out of her and their son’s life, then she would be willing to give Baker 10 million dollars as a reward for ending their suffering.

At this point, you are wondering what is the big deal, this film doesn’t sound like it is that bad, seems pretty straight forward. Well while all this is going on, there is a mysterious man in a business suit named Reid Miller (Jeremy Strong) that is running around the island, looking to talk to Baker, but is always missing him. So when Baker decides to take on Karen’s offer to kill Frank, Reid confronts Baker and thus the twist of the film is revealed, and it is one of the most confusing, dumbest twists I have seen in a film in a long time. I will not be spoiling the twist because it is one of those you have to see to believe and I would never take a moment like that away for anyone but it is at this moment where the film lost me. I was very forgiving to most of the plot holes in this film, the strange character decisions and dialogue, the questionable directing choices that Knight makes with quick whips and zooming in and out of the camera in certain scenes. But once that twist came to the surface, and we were going down the rabbit hole, a rabbit hole that made no sense to me what so ever, the film loses all sense of what the rules are and what it was trying to accomplish while getting us to the finish line.

I will give this movie some credit, in that it is scrappy in trying to get you back on board by the end of the film. There is an emotional connection to Baker and his son Patrick that I did feel by the end of the film when I was watching it. But upon reflection, the emotional thread is empty for me because of everything that led up to those closing scenes and the confusion within the surprises that makes the viewers mind scramble in trying to understanding of what is going on. Thus when we are given the touch/troubling moments at the end, I don’t believe we are given enough time to compress everything we have seen on screen to care about this father, son relationship at the end or feel good about the conclusion of this film. Knight’s script for Serenity is a jumbled case of trying to cram everything he wrote down on a check list before writing the first draft and seeing if he can get it in because he doesn’t want any stone to be unturned. McConaughey, Hathaway and the rest of the cast try to do their best with what they are given but what they are given is ridiculous at times and doesn’t add up to anything worth a damn when you think back on it. Sometimes a simple story is all we need in a thriller, leaving the bells and whistles out can be a good thing and that is what the first half of this movie is, a simple story, much like Knight’s last feature film Locke. But when he reaches for the stars, Knight fails to catch anything, thus leading me to admire what this film could have been, instead of what we were given.