Movie Review: ‘Ron’s Gone Wrong’ Is One Of The Best Animated Films of the Year 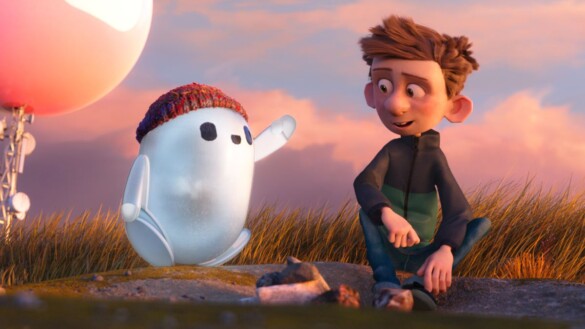 Synopsis: The story of Barney, an awkward middle-schooler and Ron, his new walking, talking, digitally-connected device. Ron’s malfunctions set against the backdrop of the social media age launch them on a journey to learn about true friendship.

After Disney closed Blue Sky Studios earlier this year, there was a lot of skepticism about whether or not the studio would openly embrace animated films under the “20th century” banner. Spies in Disguise was Disney’s first animated film released under the Fox banner, but the movie was already being made before The Mouse bought it–and it, unfortunately, would be the last Blue Sky would ever release. So it’s even sadder when you realize that Disney is currently developing an Ice Age film for their streaming service, Disney+, and will not even work with the studio that brought these characters to life in the first place. So what are the plans for Disney’s future with 20th Century Animation? For now, they are still left in the dust, but at least we can hold on to Ron’s Gone Wrong, one of the most charming animated films of the year.

Easy comparisons will be made with Sony Pictures Animation’s The Mitchells vs. The Machines, as it not only stars Olivia Colman, who was in both films, but draws on the same theme of humankind’s relationship to screens. And while The Mitchells vs. The Machines was more vivid and entertaining, Ron’s Gone Wrong is equally as heartwarming and could make you shed some tears during the end. The gist is simple: virtually everyone is “connected” through B-bots, which are solar-powered devices designed to become the user’s friend (and life, but more on that later). The only one in the world that seemingly doesn’t have this device is Barney (Jack Dylan Grazer), a middle-schooler who has a hard time fitting in due to his awkward family (Ed Helms and Olivia Colman) and every other kid not bothering to talk to him since they have a legitimate “social” life with a B-bot.

When his father (Helms) finally caves in and gives Barney the B-bot he has always wanted, Ron, the robot (Zach Galifianakis), starts to malfunction and become even more awkward than Barney himself. Meanwhile, the Bubble company, which created the B-bots, are at heads with one another, with the CEO (Justice Smith) wanting to know more about Ron, whereas its COO (Rob Delaney) wants to take over Bubble and make kids addicted to their B-bots until they no longer sleep.

By the end of the film, Barney will start to develop a genuine friendship with Ron and rekindle with some of his childhood friends as they begin to “unplug” from their virtual worlds to the real ones. Of course, that’s entirely predictable, especially if you’ve seen The Mitchells vs. The Machines, but it’s Barney and Ron’s journey that gives the film’s its completely human core. The comedic timing between Grazer and Galifianakis is terrific, with the latter actor being the star of the film. Once Barney turns Ron on, the film becomes an absolute laugh-riot from beginning to end. The animators use Ron’s eyes as the principal drive for its facial expressions and physical comedy, and there isn’t a single moment wasted with the premise of a broken robotic device. Ron’s emotionless laughs exacerbate the tension and awkwardness of a situation Barney becomes thwarted every time Ron decides to anthropomorphize his robotic personality and learn more about what it means to be a “friend” rather than being fed an algorithm. But it’s that connection that differentiates Ron from other B-bots and makes him more fun to be with than any other B-bot who will make up their friendship through a pre-conceived formula and will never be as genuine and human, first and foremost, as a real friend. Galifianakis has an absolute ball, and he’s joined by a star-studded cast that aids him in becoming one of the most memorable animated characters of the year.

Ron is the closest thing Barney will have as a real friend since the kid is forced to ultimately nurture him and make him learn about the natural world without an algorithm that will make a child addicted to a screen. And while the movie’s commentary on social media and influencer culture are fairly surface-level and clichéd, they’re more than essential and need to be addressed. Anybody that tells you they can function perfectly well without social media may be lying, as it’s become a critical part of our everyday life for many work and academic-related purposes. And for film critics, it’s an incremental tool if you hope to get the word out and make sure your writing is seen by the masses who may or may not click past a headline. But the platforms pose a real danger to children, who may want to model influencers or become exposed to dangerous conspiracy theories early, without them knowing what constitutes legitimate or misleading news. So it’s excellent that animated films address the problem head-on and teach children that the outside world is far better than anything the virtual one may have in store for you.

I speak from experience, as someone who at a (too) young age got exposed to YouTube and could easily spend the entire day on the platform consuming content from days on end, which unfortunately made me addicted to the web and carried its boatload of academic problems. With an intervention that legitimately saved my academic prospects, I was able to get out of this spiral and care about my academic future.  So anytime a film talks about Internet addiction, I know exactly the effects it can have on impressionable tweens and teens. The worldwide web is vast, with so much to consume, and you can get easily lost in the swirl of it all, but nothing compares to legitimate human connections. Ron’s Gone Wrong makes sure to tell children (and adults) that Internet Friends and “followers” will never compare to the bond you forge with someone that’s right in front of you.

Ron and Barney’s relationship isn’t fake, compared to everyone else with their B-bots. As they try to escape Bubble security guards who want to crush Ron for his erratic behavior, Ron starts to exercise legitimate feelings towards Barney, while Barney learns that there’s more to life than a B-bot. If everyone had the same “bot” like him, humans would learn to live collectively again and not compete with one another on “likes” and “views.”

As accessible as the Internet can be, and with your popularity rising in an instant, don’t forget that it takes one mistake for everything you’ve built to go away practically. Unfortunately, the Internet is a vicious place, and Ron’s Gone Wrong doesn’t shy away from addressing cyberbullying and online harassment issues as one aspiring influencer becomes the world’s literal laughingstock. It’s a hard scene to watch, but if you’re going to explore the theme of influencer culture, it needs to be addressed, and the film does it in such a mature way that you can’t help but admire everything it wants to talk about even if some of it feels a tad clichéd.

As many animated films want to take children away in whimsical adventures, few want to address complex subjects for kids to re-think their place in this world. Still, whenever an animated film decides to go in that route, it’s always the most rewarding type of film for kids. Think of Coco, which delved deep on the theme of death with such grace and maturity it became a life-affirming experience for both kids and adults.  Or Toy Story 3 taught us that it’s OK to move on as children become adults and their imaginative bubble starts to pop. These films mainly worked because it wasn’t afraid of diving deep into themes that kids will eventually have to confront with and do it in a way that will prepare them for their life bubble never to be the same again.

Cinema is the most approachable art form out there, one that breaks all language barriers and has the power to unite us over one single movie. Directors should never, ever shy away from dealing with mature themes in animated films if it means vulgarizing it in a way that kids will be compelled at and learn something from it, absolutely go for it. Ron’s Gone Wrong does that and more through detailed animation, memorable characters, and humor so contagious it will automatically put a giant grin on your face as soon as Ron opens his eyes.

I never expected it to like it this much, as the trailers made it look like it was too familiar for me. But I quickly became hypnotized by Ron’s unintentional deadpan physical and verbal comedy and started to be moved at how human Barney and Ron’s friendship was. And as the credits rolled, I couldn’t believe that a movie like this would dare come out after a year where all of us were forced to be virtually connected due to COVID-19. Ron’s Gone Wrong acted as a potent reminder that the world is much better once we’re together in person and not through our screens, and it’s something we all desperately need to be reminded of. And if this will be the type of animated films Disney will embrace for their 20th-century banner, then sign me up.