Movie Review: ‘One Cut of the Dead’ is a horror masterpiece 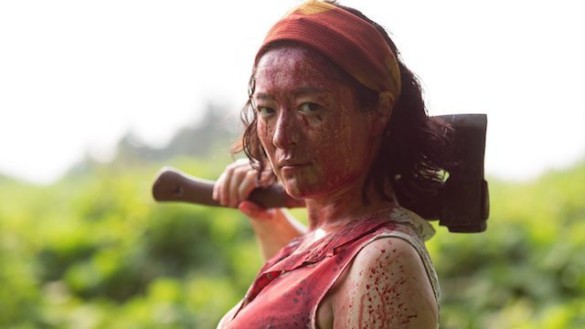 Synopsis: Things go badly for a hack director and film crew shooting a low budget zombie movie in an abandoned WWII Japanese facility, when they are attacked by real zombies.

One Cut of the Dead is a Japanese film (in Japanese with English subtitles) that is part horror, part comedy. The plot is fun to describe, it’s about a live streamed tv zombie apocalypse movie, who’s film crew runs into real zombies while filming. The movie can be split into three parts- First, the entirety of the low-budget One Cut of the Dead film (which is done as one 37-minute continuous shot). Then, the film zooms back a month prior to filming and shows you how this movie came to be and gives you background on the characters. Finally, the movie wraps with the hilarious “behind the scenes” look at the live tv broadcast and all the craziness that happened while making the movie. It’s a movie inside of a movie inside of a movie. It’s weird to describe but go watch it and it will make sense.

I cannot express how much I love this movie. I am so grateful I got to see it on the big screen and that I went in mostly blind as to what I was going to be watching. All I knew is that it was Japanese zombie movie that my friend highly recommended. This film is the perfect balance of cheesy zombie gore and camp that keeps you eager to see more. Once the film got going, I did not stop laughing, I’ve never seen anything quite like it. They managed to fill the movie with jokes and mayhem, while also giving you a good background on the characters. Takayuki Hamatsu, who plays the film’s director Higurashi, was a stand out for me. His energy, facial expressions and comedic timing were just as good (if not better) than any well-known comedic actor working today. My other favorite was Harumi Shuhama who plays the director’s wife, Nao. She added some great comedic bits to the film. I love the format of the film, how they kind of unofficially split it into three sections, it was something different for me. The music also stood out and was a great feature of the film.

One Cut of the Dead hasn’t had a wide release yet. It has been making its way around film festivals, primarily in Asia, since November of 2017. It’s been well received at its screenings and has been racking up great reviews and ratings for two years. I know it was one of the fan favorites at the film festival, Winchester Film Club’s Lost Weekend XI, where I was lucky enough to see it. I heard stories about a pirated copy appearing on Amazon and it causing problems with the films distribution. I hope these are resolved in the future and people can see this film. I know an American/English remake is in the works, but I am confident it will not have the charm the original holds.

One Cut of the Dead has definitely made its way onto my “Favorite Movies of All Time” list. It has re-sparked my interest in Japanese films, so I will need to go out and discover more to enjoy. A prominent feature of this film is its 37-minute continuous shot, as well as its masterful balance of zombie gore and humor. I highly recommend this movie to anyone who has the chance to see it.