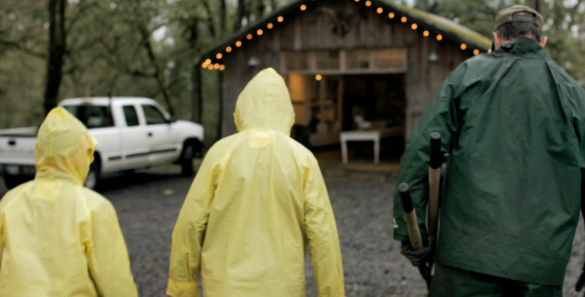 DIRECTION
Joseph Arney and Christopher Graham’s Noble Fir is an interesting character piece that provokes serious questions and forces you to think about them. The aesthetic created is raw and emotional, putting you into the mindset of Henry Dean, our main character. Arny and Graham’s use of natural light and sound elevates the mood and creates a beautiful ambiance. Their camera work was also interesting in the sense that it moves with viewpoint of Henry. As Henry walks and moves about the camera will intentionally shake and dance with him. Some of the film’s themes aren’t executed well toward the end and a few other elements could’ve been handled better, but overall, descent work here.

SCRIPT
Henry Dean is a Christmas-tree farmer whose recently gone through a terrible tragedy and we find him in a place of grieving, where anger and heartache works as Henry’s puppet-master. He’s isolated and likes it that way. He doesn’t want to talk about it. He can barely stand being in line at different stores, going to church or heck, even being around his own grandchildren. He works meticulously on his trees and just wants to be alone. While the script does have religious undertones, most of the film rests on Henry (not) trying to deal with grief that he’s carrying like a boulder. That being said, there’s a few scenes in the third act that felt very heavy handed and forced it’s themes in a way that just lit up like a, well, Christmas-tree. It was too transparent and felt a bit tacky which surrendered the potency it could’ve had. Despite those flat sequences, the emotions throughout the film are authentic and something that’s easy to engage with, especially for those who’s suffered through this story. At the root (pun intended), it’s a story of bitterness and how that can consume and destroy you internally, a struggle that’s as provocative as it is arduous.

PERFORMANCES
Richard E. Wilson’s performance is a polarizing one. His non-verbal mannerism’s and facial expressions completely sell Henry’s struggle, which is deep and painful. However, his dialogue didn’t match the same grittiness and torment you saw internally, which made for a contrast that just didn’t work. The supporting characters are fine but definitely feel amateur at times. That being said, it’s not the worst thing you’ve ever seen and they serve their purpose okay enough for the film to work.

SCORE
The score by Ian Jenkins is GORGEOUS! The score is flawless and elevates the film to a whole new level. Jenkins uses simple piano notes and blends them with beautiful strings that make for a poignant and effective score. The music is the external mood for the internal mood we see in Henry, which was perfect. It’s fantastic and used amazingly well within the film.

FINAL THOUGHTS
Noble Fir is pretty descent film that explores the heartache caused by the sudden loss of your most beloved, something a lot of us can relate with. The film’s explores what it means to let people in and why it’s important to grieve with them which is fascinating and inspirational. The execution of making that clear could’ve been handled better but overall Noble Fir was still a good experience and film I’d recommend.