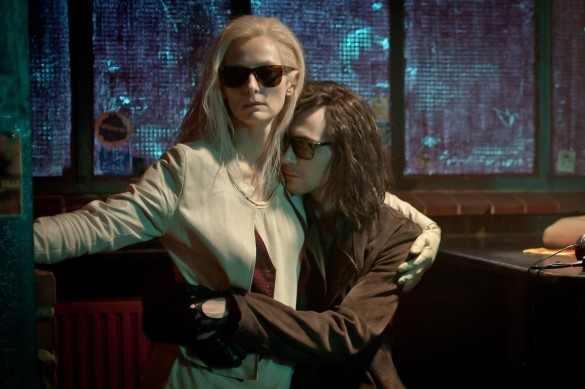 Synopsis: A depressed musician reunites with his lover, though their romance – which has already endured several centuries – is disrupted by the arrival of uncontrollable younger sister.

DIRECTION
Jim Jarmusch’s mood piece about vampire’s mulling in the mundane-ness of their current state is one of the most fascinating things I’ve seen all year. The aesthetic is dark, of course, but used gorgeously to reflect the state of mind of these characters. The way Jarmusch uses that for comedic bits is also great and the timing couldn’t be more perfect. You won’t find typical vampire tropes here, but instead, uses them more as props to tell a more alluring story. Blood is as much a drug as it is food and it’s the zombies (humans) that are destroying the world. Only Lovers Left Alive is just brilliant.

SCRIPT
One of the best things about this movie is ironically something that is often criticized is most films. There is no narrative. The film just injects us into the normal lives of Adam (Tom Hiddleston) and Eve (Tilda Swinton) who are married and have been around for centuries. Adam is a musician who thinks modern society doesn’t appreciate real art anymore and has destroyed a thing that was once great. Moreover, he lives in broken down Detroit, which impeccably parallels the aforementioned notion. Eve is off reflecting with other vampires, and artists, whose made major contributions to society. Eventually Eve comes home and the film focuses on the interaction between these two and how close they are, which is incredibly compelling. Eve’s sister, Ava (Mia Wasikowska), drops by and causes a little chaos which can feel distracting a little bit. Ava’s presence though livens up things a bit and offers a new dimension to Adam with the repercussions of her actions. All in all, while there’s not much here in terms of plot, it’s the characters who drive the story and make it so rich and captivating.

PERFORMANCES
Arguably the two best performances of the year so far, or at least pretty darn close, Swinton and Hiddleston are absolutely riveting in every way possible. Their chemistry is palpable and magnetic, which is vital for a film that heavily relies on it. Throughout the entire film you didn’t care what was happening, you just wanted to see these two together. Anton Yelchin is the only “zombie” in the film and while he doesn’t have a ton of screen time, he’s great and works well with Hiddleston’s character. Wasikowska is the most stereotypical in the film, but it’s with intentionality as she represents everything the Adam character hates. That being said, Wasikowska plays it wonderfully from that perspective. Regardless of whether that works for you or not, in the end, this is all about Swinton and Hiddleston who absolutely kill (pun intended) it.

SCORE
Jim Jarmusch’s band, SQÜRL, does most of the music here and it’s fantastic work. Several different types of guitars and strings are used here and the score gorgeously reflects the mood and state we are supposed to experience. The melodies are nice and soothing which interweaves with our character’s really well. And given that music is integral to the actual characters, it seems to reflect their personalities well too.

FINAL THOUGHTS
Only Lovers Left Alive says a lot about art and the way we perceive it, and by all accounts, don’t seem to appreciate it the way we should. Regardless of how you embrace that theme, the way it’s presented and executed here is flawless. The performances are amazing and the way Jarmusch uses this kind of world is simply fun. Go see this movie.

We recently discussed this on an InSession Film Podcast: Extra Film episode, which you can listen to by clicking here.