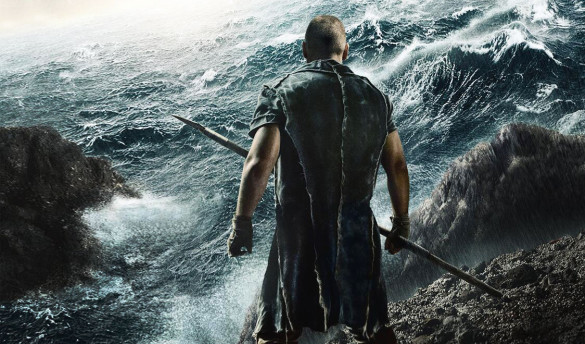 Synopsis: A man is chosen by God to undertake a momentous mission of rescue before an apocalyptic flood destroys the world.

DIRECTION
Darren Aronofsky is known for his creative worlds, strange sequences and bleak stories that on the surface made Noah seem like a good fit for him. While the story of Noah is famous from the Christian Bible, the world that Aronofsky creates here is almost from another planet. If you’re to enjoy this movie, you must be willing to submit to that as this world is more mystical, fantastical and almost Harry Potter-esque. Aronofsky is very careful about not using that word that seems to scare and offend many, “God”, so instead we are introduced to “The Creator”, again keeping you on another world. The landscapes are dry and baron, creating the desperate feeling of change the world needed. Most of the camerawork was solid but there were a few shots that felt off course and some of the CGI felt lazy. However, as with all Aronofsky films, there are several dream sequences that are well shot and crafted to elevate this story and world we’re introduced to, which was easily some of the brightest spots of the film. Overall, purists will vomit over this version of Noah, but if you’re willing to lay down expectations, you can believe what Aronofsky is doing, at least from a direction standpoint.

SCRIPT
Aronofsky, as the writer, is quite a different story. Again, Aronofsky’s films are known for their bleakness, yet also wonderfully portrayed characters that have many layers to them. The story starts out with an opening sequence laying out the backstory of creation, the Garden of Eden, Cain and Able and the downfall of mankind. We see how sin and corruption has taken over the world, from Adam all the way through Noah’s generation. It’s also not long before we are introduced to fall angels, who have become rock-like creatures (they explain why in exposition later) that roam the Earth to try to help mankind. Think of them like the Tree Creatures in The Lord of the Rings. In a dream, The Creator, tells Noah he’s destroying the Earth for the sins of man and Noah interprets the dream as an extermination of man-kind. Noah takes his family on a journey to meet their grandfather, Methusela (Anthony Hopkins), who helps Noah interpret his next steps. Soon Noah and his family start building the ark, with the help of these rock-like creatures, and we see the birds, the snakes and all kinds of animals make their way to the boat. After the animals arrive, we meet Tubal-cain (Ray Winstone), the representative of the fall of man, whom appears out of nowhere with no explanation or backstory. And now he wants Noah’s boat. The biggest problem with the script is Noah himself. The story of Noah is one full of hope and new beginnings all while dealing with death and destruction. There are many layers to Noah that make him compelling, however, Aronofsky contrives ridiculous family melodrama that wasn’t necessary and took away from the natural attractiveness to the character. His inner transformation is kind of interesting though, but isn’t enough to save from a muddled script.

PERFORMANCES
Russell Crowe and Emma Watson are out of this world good in Noah. Crowe brings this character to life and captures the struggle of what would of been going on in Noah’s mind. He makes you love him, makes you hate him and brings you back to him again. A better script and this could of been one of the best Biblical characters we’ve ever seen in film. Watson doesn’t have as much to do until the third act, but man she delivers. She’s powerful, moving and brings her A-game. Jennifer Connelly and Anthony Hopkins are also solid in their roles as well.

SCORE
Clint Mansell brings a solid score for the film, but ultimately a forgettable one. It moves quietly throughout most of the film, other than a few big moving shots Aronofsky has throughout. The music is beautiful though and does raise some scenes well. In the end though, there’s not much to really grab your attention, but it serves well.

FINAL THOUGHTS
Noah is a film that both believer and non-believers can enjoy if you’re able to submit to Aronofsky’s world. His mystic elements is not the problem. The problem is a muddled script with unnecessary contrived plot elements that take away the heart of the story. Noah is compelling without having forcing it. He understood that death and destruction was coming but that ultimately it would bring a new beginning. Aronofsky lost sight of that in his script and blew up the natural rythms that could of made this film great. For me, it’s a disappointment.