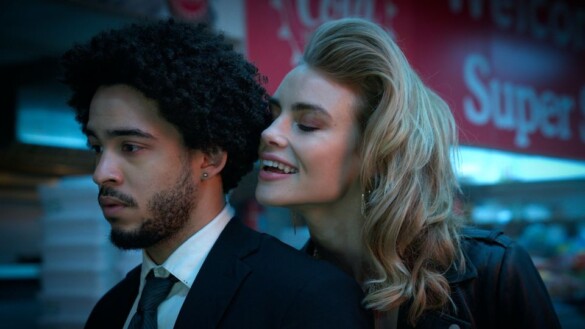 Synopsis: A college student moonlighting as a chauffeur picks up two mysterious women for a night of party-hopping across LA. But when he uncovers their bloodthirsty intentions – and their dangerous, shadowy underworld – he must fight to stay alive.

There are a lot of vampire movies, which means the odds of seeing something wholly new and unique is slim. Night Teeth doesn’t create something new with these creatures of the night, but is a sometimes enjoyable mashup of genres. The film is a supernatural gangster picture with a small amount of coming of age mixed in. It’s a little like Collateral, but with vampires.

Where the film fails to keep its intrigue is in its lore. The voiceover at the beginning sets up the rules of the Los Angeles vampire/human truce, but after that the ideas, groups and concepts can get hazy. Though, there’s little to distract from the haziness. There aren’t cool fight scenes or chases. Most of the fight scenes take place in the background of shots or not on screen at all. Some of this could be ascribed to budget or because the filmmakers were trying to put their own spin on it, but it also makes for a bit of a snooze. Monster films are only as good as their kills and this film avoids a lot of the messiness.

It would be interesting if the avoidance of messiness were in service of a dynamite character building subplot, but that’s not what happens. The romantic angle falls very flat. Jorge Lendeborg Jr. does his very best as Benny. He adapts that boyish, Hugh Grant stutter with accompanying foot in mouth disease, but when it’s played against Debby Ryan’s Blaire, it feels as if Benny’s trying to impress a brick wall. Brent Dillon certainly wrote it as if Benny is falling for the manic pixie dream girl, but what Ryan brings to the role is a different interpretation that completely clashes with any attempts at a charming romance. It would be laughable if the idea of that romance made you feel anything.

This isn’t to say Night Teeth is completely without merit, though. There are a handful of scenes created by director Adam Randall and cinematographer Eben Bolter that are visually engaging. They do employ a lot of neon saturated colors as is typical of today’s action/thrillers and they do often keep the camera stagnant and let the action happen within the frame. One of the funniest scenes is as Victor, played blandly by Alfie Allen, and Zoe, played by Lucy Fry who really sinks her teeth into the role, are on a phone call check in. During Victor’s half of the call, the camera is in a wide shot so we see Victor’s trunk open and a man in pain flop out. We watch the man crawl away from the car. Casually, and still conversing, Victor walks over to the crawling man as the camera pans with him and he drags the man back to the car like he was nothing. It’s a fun scene that reminds us how powerful vampires are supposed to be.