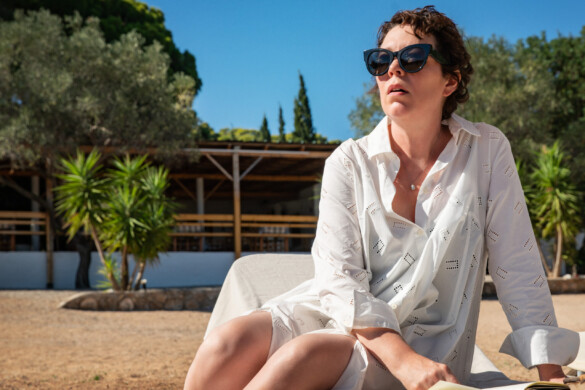 Synopsis: A woman, while on a summer holiday, finds herself becoming obsessed with another woman and her daughter, prompting memories of her own early motherhood to come back and unravel her.

Academy Award nominee Maggie Gyllenhaal has long been a champion of complex female representation, as seen in her stunning performances in features like The Kindergarten Teacher and Crazy Heart, as well as the television series The Honorurable Woman. Now in her directorial feature debut, Gyllenhaal is able to craft not just one but several strong and complicated women all at once, resulting in a hypnotic and beautifully crafted suspense drama.

Based on Elena Ferrante’s novel of the same name, the main narrative of The Lost Daughter takes place on a beach vacation, where Leda, (portrayed by Olivia Colman), a professor, is away on a much-needed summer break. While on holiday she meets a variety of characters whom she forms bonds with, none more so than Nina (Dakota Johnson) who Leda often watches struggle to meet the needs and demands of her young daughter.

Leda can see the struggles of Nina from afar before they even strike up a conversation, with the acting between Colman and Johnson in these moments exquisite as they share such intimate exchanges with nothing more than their eyes. Leda can see the burden that Nina’s daughter is having on her, and as the narrative progresses we learn that this is something all too relatable for Leda.

Intertwining with the present day scenes are flashbacks of Leda’s younger days, where Jessie Buckley does an expert job at imitating Colman’s mannerisms and voice. The attention to detail that these two actors put in to ensure that both of these characters feel like the same person is close to perfection and only adds more weight to the unfolding unpredictable story.

To spoil or even hint at any of the big reveals in The Lost Daughter would be a disservice, but it’s important to at least recognize the near-impeccable work that Maggie Gyllenhaal creates in regards to these complex, emotional characters. Nothing is as it appears, and trying to guess where the story is headed will only throw you further off track, with Gyllenhaal using audience expectation to craft unexpected twists and nuances that only the book readers will have seen coming.

The film’s biggest strength is its lead Colman, who is once again Oscar-worthy as she so often is these days. She captures the present day character of Leda with extraordinary amounts of charisma and realism, while Buckley doesn’t quite get to have as much as freedom with the character in the flashback scenes (although this is clearly intentional from Gyllenhaal and is meant as a strength of the film and a testament to Buckley’s brilliant ability to play the character in this way).

The film’s other MVP is Johnson, who is simply sublime in every meaning of the word. Her ability to convey dissatisfaction and discontent with nothing more than her eyes is wonderful to watch, and the chemistry she and Colman have together elevates the film to the highest possible level.

While the performances can be raved about all day, the woman that brings out such quality in her actors is of course Maggie Gyllenhaal and it’s unbelievable to think that this is her debut directorial feature. She doesn’t waste a frame or a moment, with every scene integral to adding layers on to each of her characters and furthering the unpredictable roads that the narrative contends with. It’s an assured display of confidence and a film that makes many think that Gyllenhaal will become an actor’s director, one that will shine in her ability to bring the very best out of everyone she’s working with.

It’s not just those in front of the camera that produce career-best work under Gyllenhaal’s leadership, but those behind it too. Musician Dickson Hinchcliffe produces a wonderful score, replicating almost perfectly note-for-note the kind of unpredictability and suspense that the pictures themselves are displaying. Editor Affonso Gonçalves works well alongside Gyllenhaal ensuring that not a single scene is wasted or deemed replaceable.

To find flaws in the movie serves only to do so for the sake of it. Perhaps at times, The Lost Daughter can feel a little too heavy or unsettling in its uncertainty, but that Gyllenhaal is able to create this kind of emotion intentionally in her first directed film is commendable. The flashback scenes are undoubtedly the least enjoyable and perhaps there are too many of them, but that speaks more to the performance of Colman and how we wish she could be in every single frame.