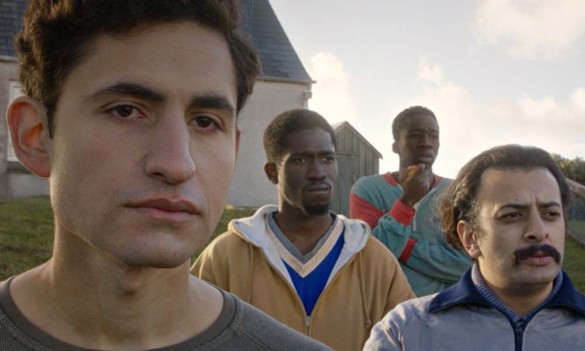 Synopsis: Omar is a promising young musician. Separated from his Syrian family, he is stuck on a remote Scottish island awaiting the fate of his asylum request.

Even for residents of Scotland, the Uist Islands off the north coast of the country would be a harsh place to live. Sparsely populated with little in the way of entertainment and experiencing temperatures frequently in the minus degrees, it is hardly a tourist destination. Spare a thought, then, for the refugees who have made the islands their home as they await a decision on their application for asylum. Coming from countries in the Middle East where sweltering heat is common and civilian populations are large, it must surely be a bleak culture shock to experience. With a basis in truth (Syrian families are often relocated there when they arrive in the UK until the government decides what to do with them), Ben Sharrock’s sophomore feature Limbo is a droll and deadpan take on the immigrant experience, often languidly humorous and offbeat. Your mileage may vary depending on your comical sensibilities, as nothing here is particularly overt and proceedings bare more of a resemblance to Local Hero or Withnail & I than any modern comedies, however, fans of this particular formula are sure to find much here to enjoy.

Omar (played with a dead-eyed wit by Amir El-Masry) finds himself on the Islands of Uist as he waits to find out if he has been granted permanent residency. His parents are in Turkey (he regularly contacts them using what must be one of the last working payphones in Scotland) while his brother is back in Syria fighting for its liberation. Omar is angry and frustrated. Cut off from his Syrian identity and treated as a terrorist by local kids who threaten violence if he tries to bomb anything, he spends his days at a center where he and his fellow expatriates are focused to sit through cultural awareness lectures on how to dance with girls in nightclubs and the proper tone to take when at a job interview. Add to this, he is creatively stifled; choosing not to play his beloved oud likely because there is very little creative joy to be mined from his circumstance.

Alongside Omar, and providing both humor and companionship is Farhad (Vikash Bhai) an Afghani obsessed with Freddie Mercury (who points out they were both Zoroastrians and preferred the same style of mustache), and Wasef (Ola Orebiyi) who has come to the UK to fulfill his dream of playing for Chelsea Football Club despite his age and the fact he isn’t actually good at football. The three of them function as part of a group and much of the focus here is on their attempts to integrate into Western culture, by doing things like arguing over whether Ross and Rachel from Friends were on a break, or joining the locals in a painfully depressing pub on karaoke night. The style is episodic and rather glib; there are touches reminiscent of the likes of Aki Kaurismäki throughout (particularly Lights in the Dusk), and it might test the patience of the average viewer.

Undoubtedly the heart of Limbo is Omar. His restive nature seems starkly at odds with his surroundings and El-Masry tenderly evokes a sense of loss and heartache for a man who has lost his country and identity. He provides a useful way in for the viewer and keeps your sympathy throughout; a late act tone shift would feel a little more jarring if he wasn’t there to anchor it in the way he does. There are little pops of profundity here and there, but there’s a feeling that Sharrock can’t quite carry it off, occasionally drifting into cloying melodrama, and so we’re left to mine what meaning we can from proceedings.

There are also genuine moments of comic genius such as when Omar meets a Pakistani grocery store owner (played with brilliant deadpan sensibility by Scottish comedian Sanjeev Kohli) who introduces him to the many varied British epithets regarding race. It’s moments like these (and to be fair Sharrock walks a thin line as a white Scottish man directed a movie about immigrants experiencing racism in Scotland) which stand out, feeling natural and real.

Having established itself through an often tediously slow setup, Limbo then heads towards a rushed, tonally inconsistent ending which cheats the viewer out of any meaningful conclusions. It’s a shame because the time and effort spent on establishing this world is then hastily deconstructed and it feels like it didn’t mean much in the end.

Sharrock tries to evoke filmmakers (such as the aforementioned Kaurismäki, as well as Jim Jarmusch) who have done much better. With an achingly beautiful backdrop – Scotland’s lush, scenic landscapes are highlighted well here – full of open, deserted roads, rolling hills, and the casual grey-blue sky of the north, Limbo looks stunning (even if it is hampered by a boxy 4:3 aspect ratio) and makes the wise decision of focusing on Omar, who is a compelling and sympathetic character. However, too many moments dip into absurdism which both undermines the more profound moments and doesn’t stand out in their own right either. It’s a decent movie, with a great performance from El-Masry but unfortunately doesn’t live up to the hype.