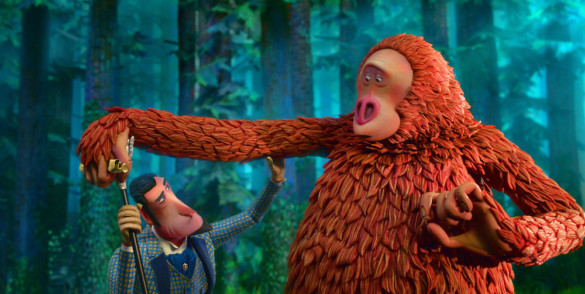 Synopsis: Mr. Link recruits explorer Sir Lionel Frost to help find his long-lost relatives in the fabled valley of Shangri-La. Along with adventurer Adelina Fortnight, this trio of explorers travel the world to help their new friend.

Even without the name recognition and power of Disney, Pixar, or Dreamworks, Laika continues to produce highly technical and whimsical films that delight the eye and the soul. Laika’s newest film, Missing Link, is an incredible addition to Laika’s already stunning resume. If you are unfamiliar with Laika’s work, here is a quick recap: Coraline (2009), ParaNorman (2012), The Boxtrolls (2014), and Kubo and the Two Strings (2016), all of which deserve a viewing. Using the unbelievable technical ability Laika has shown over a decade of movie magic, Missing Link exists as an enjoyably hilarious film that entertains and delights but is not without its flaws.

Missing Link is the story of Mr. Link (Zach Galifianakis), a lonely sasquatch, who enlists the help of famous explorer Sir Lionel Frost (Hugh Jackman) to help him find his long-lost cousins. The chemistry between the voice actors, including the brilliant Zoe Saldana as Adelina Fortnight, is palpable. One can tell these actors are committed to their roles as well as committed to what Laika is trying to achieve. The animated world that is created is visually stunning and the characters feel right at home in every strange yet beautiful location. The technical ability portrayed in this film is truly mesmerizing. One finds themselves lost in the colorful grandeur of the film.  The vastness of the world being created, the exotic locales, and the set pieces all envelop a very simple and personal story.

The story of inclusivity and belonging resonates throughout the film. There is conflict between the characters as they try to find their place in the world. Throughout all the places the characters travel, a thin thread of story unites them, and herein lies the flaw. The story is thrust on the audience so quickly, it begins to feel forced and uncoordinated. Being an animated film and having a rather short run time may be the culprits here, but main plot points are fired at the audience rather quickly, and this leaves us reeling. That is, until the story settles a bit in act two. In other words, there is a lot of character development and introductions in the first ten to fifteen minutes, which leaves the viewer with mixed feelings about certain characters, Sir Lionel Frost for one, that can lead to dissatisfaction with regards to his character arc. This could just be nitpicking, but Coraline has a similar run time and the characters feel more developed and nuanced. These slight flaws are mere drops in the bucket when compared to the visual magic Missing Link contains. However, having more clearly defined and imaginative characters would have made this film a near masterpiece in the annals of animated cinema.

Overall, Missing Link is fun, exciting, and beautiful to behold. The heart is there but feels somewhat lacking due to a compressed story. The technical achievement is truly breathtaking and is a pure joy to behold. The jokes and physical comedy often reward or subvert expectations, which seems to make Missing Link feel ephemeral and quick-witted. Missing Link quite literally finds the right balance between beauty and the beast.

Hear our podcast review on Episode 321: