Movie Review: ‘Minari’ is a Breathtaking Account of the Korean Experience In America 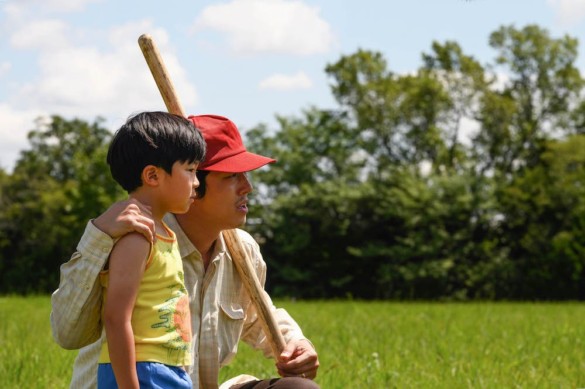 Synopsis: A Korean American family searches for a better life when they move to a small farm in Arkansas.

A Korean family, already immigrated from their homeland to the West Coast, makes a bold move to rural Arkansas where Jacob Yi (Steven Yeun) seeks to make it on his own as an independent farmer. His wife (Han Ye-ri) is immediately skeptical based on the fact they are now living in a trailer home on cinder blocks and far away from the city. Coming along with them are their two kids, David and Anne, while their grandmother, Soon-ja (Youn Yuh-Jung) comes along later, which twists up the family chemistry in an already-full house far from the land they know. Yet, the determination to start a new life is burning inside.

What is cultivated is an astonishing piece of art from writer/director Lee Isaac Chung who used his own personal life growing up in Arkansas in the 1980s as the backdrop of the story. We already knew Yeun was already an amazing actor thanks to his performance in 2018’s Burning and on the TV series The Walking Dead. But now, he adds on more to being a thespian actor who takes inside of him the immigrant experience regardless of nationality. Han is brilliant also, playing the suffering wife who does not want what his husband has got for the family and struggles with the isolationism from others. Even though there is a tiny Korean community in Arkansas, she doesn’t feel connected to them as well. Han’s character is a Christian, and when she asks the other Korean ladies why there isn’t a Korean church set up, one of them responds that the reason they’re not in the city is to get away from the church.

David and Anne, played by child actors Alan Kim and Noel Kate Cho respectfully, are innocent youngsters who have already become assimilated with their home since birth. Alam Kim is, for now, this year’s Jacob Tremblay/Quvenzhane Wallis of being cute and brilliant in their performance. As David, he is innocuous and snoopy exploring this new farm, wanting to be close to his father’s work, but it is Youn as their sly grandmother who really takes David in closely when she has brought over from Korea the local spice which is what the film’s titled is called. Tucked away from the main farm, it is a secret garden, an authentic sector of the Korean land they have escaped (in the 80s, South Korea was politically unstable and shifted away from its rural roots) that is a symbol of their heritage.

While the road isn’t as rigorous as other American Dream-themed movies, the blood, sweat, and tears are legitimate to all immigrant families in this country. Minari doesn’t play hard to make it viewers feel anguished thanks to its light, funnier moments sprinkled throughout the film. Chung avoiding moments of being overdramatic makes the movie feel just about right and balances the storylines. The splash made at Sundance earlier this year – when we were still all sitting in movie theatres next to each other – is a statement of marking the territory that a new American film for the new decade is putting down its roots for years to come.