Movie Review (LFF): ‘Another Round’ Is A Boozy, Feel Good Drama 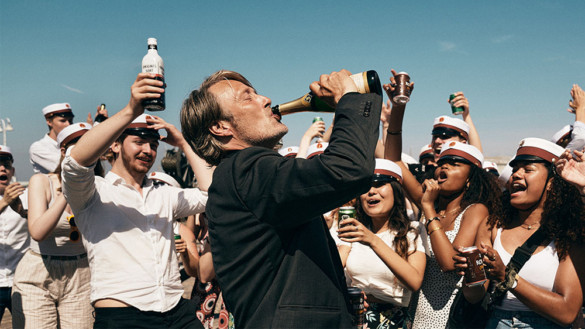 Synopsis: Four friends, all high school teachers, test a theory that they will improve their lives by maintaining a constant level of alcohol in their blood.

There has always been an existential tie between philosophy and alcohol. Some of the world’s greatest thinkers were famously loaded more than half the time, and this state of inebriation was often celebrated in their work. This idea dates back to the Symposium where Socrates, Plato, Alcibiades, and Aristophanes to name but a few, got legless while discussing the nature of love.

In a way, Another Round, the latest by Danish auteur Thomas Vinterberg, has it’s own Symposium moment early on. It comes when Martin (Mads Mikkelsen), Tommy (Thomas Bo Larsen), Peter (Lars Ranthe), and Nikolaj (Magnus Millang) are out celebrating Nikolaj’s 40th birthday. Premium alcohol is being served, caviar is being consumed, and discussions are had about the state of their lives. The four of them, you see, are fairly unhappy. They are high school teachers reaching middle age, trapped in a state of bloodless inertia. This ennui has seeped into both their home and work lives. Martin is all but estranged from his wife, Nikolaj doesn’t seem to like his kids very much, and none of them care about teaching anymore. This is apparent in early scenes which show Martin half-heartedly attempts to teach his students about Winston Churchill; he mumbles through his speech and somehow confuses WW1 with WW2. They are all four of them, on the brink. “I don’t even know how this happened” one of them comments. Time has caught up with all of them, and they don’t know what to do. Which is when a plan is suggested.

The Norwegian psychologist Finn Skårderund, it is said, suggested that the human blood-alcohol level is 0.5% too low, and for a human to be happy they should keep this topped up. It’s the equivalent of a few glasses of wine or a shot or two of vodka, but the implication by Skårderund is that being just a little sloshed every day will help with confidence, motivation, and being open. The boys decide it can’t hurt to try it and draw up a plan to enact a social experiment of sorts: they will drink throughout the day to reach that elusive 0.5% BAC (this is helpfully relayed through interstitial graphics showing the numbers climb as they drink) and see if this has an effect on their lives.

And it does. They all begin sneaking alcohol into school, through hip flasks and water bottles, and find they become better teachers. Martin especially finds he is more engaging with his students (albeit arguably more irresponsible, as his lectures pivot from the perils of WW2 to discussing why alcohol makes the likes of Winston Churchill better leaders; the kicker is the revelation that Hitler was teetotal. Alcohol kills fascism, folks), as well as with his wife, with whom he resumes regular lovemaking. All seems well for the foursome, who discover their verve and lust for life again. But how long can this love affair with alcohol last? As they careen towards tragedy – urinating beds and slamming face-first into walls on the way – there is the sense that there’s another lesson for these friends to learn, that maybe with alcohol they are sticking a bandage on a bullet wound.

Thomas Vinterberg was part of the Dogme 95 class, alongside the likes of Lars Von Trier, and those Dogme principles are (mostly) imbued here; Another Round is fairly low-key, handsomely made but not flashy. It suits the premise well. An opening montage shows young adults engaging in a binge drinking contest which isn’t overdone at all, and in lesser hands might have looked like a hackneyed American Pie rip-off. Instead, it reads as a very natural moment and captures the spirit of youth which is then contrasted with the muted behavior of the adults later.

That is where Vinterberg really shows his class because the premise requires a delicate balance. Too far to one side and you’ve got broad, empty comedy (one can imagine an American remake of this starring Adam Sandler and his famous friends, please God no), too far to the other side and you veer into dark melodrama which would swallow the movie whole. It requires a deftness which Vinterberg is more than capable of. There are moments of genuine joy here, counteracted with the darker side of tying one on with your friends until the early hours of the morning. While the friends find things to love about life again (Martin takes his wife and kids canoeing, something they haven’t done in several years), they also run up against the stringent expectations of the society around them. One scene finds the friends about to head out drinking as Peter’s wife asks him to pick up fresh cod for dinner. This leads to an utterly hilarious moment later on when the dangerously inebriated group collapse through supermarket shelves as they attempt to find fresh cod. When they can’t find any, they take to fishing in the harbor! It’s a tear-inducing moment which will have audiences remembering their own drunken tales with friends fondly, but there’s also the undertone that Peter was unable to follow his wife’s simple instructions for dinner.

Although all four men get a good run-out, this is undeniably Mads Mikkelsen’s show. The Dane reunites with Vinterberg for the first time since 2012’s The Hunt and gives a subtle, nuanced performance like we haven’t seen from him in a while. With his sharp-edged features and intense eyes, Mikkelsen has found himself cast most often as the villain – Le Chiffre in Casino Royale, Kaecillius in Doctor Strange – but to see his Hollywood oeuvre is to forget his roots at the forefront of Danish cinema. Here he reminds us he is capable of understated acting, stifling his easy charisma to portray a man sleepwalking through life. He’s almost unrecognizable in the opening scenes until the end credits scene reminds us how much fun he is. Indeed, Mikkelsen dancing will most likely be the biggest takeaway for his loyal fans.

Another Round is a raucous, joyous tale of friendship and catharsis. Its purpose is not to denigrate alcohol or act as a cautionary tale for the perils of binge drinking. Instead, it is a pleasingly affecting look at morality and society. It isn’t exactly ground-breaking (mid-life crisis movies come by the dozen these days) and doesn’t say much that hasn’t already been said, but that’s not the point; it is a fresh, optimistic look at life which balances its themes perfectly without going overboard and is aided by a wonderful performance from a never-better Mikkelsen. It is one of the highlights of the London Film Festival and deserves a wide audience.