Movie Review (LFF): ‘Rose: A Love Story’ is a Timely Tale of Isolation 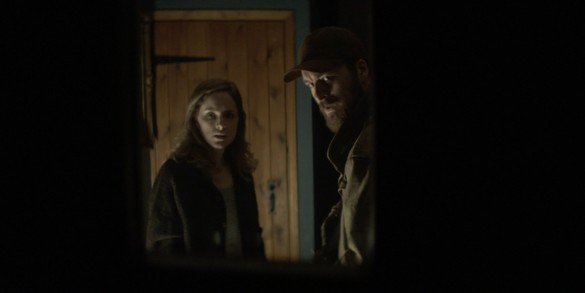 Synopsis: Gripped by a violent, terrifying illness, Rose lives in seclusion with her husband, but the arrival of a stranger shatters the fragile refuge they have built.

The theme of isolation is one that particularly hits home given the world we’re living in now, and in Jennifer Sheridan’s debut feature, COVID-19 is the least of the worries. With a fresh, unique spin on the vampire myth (who’d have thought that was possible anymore?) coupled with tense, macabre sound design and equally tense performances from its leads, Rose: A Love Story is an often engaging, if flawed, movie.

Rose and her husband Sam live in seclusion in the woods of an unnamed British town. She is hard at work on her novel, while he spends his days hunting for food and collecting petrol. Although it’s a strange situation, they do have what appears to be an ordinary relationship. They argue they have sex, they have rules established to maintain their relationship (such as ensuring they always eat dinner together). So far, so normal. Except when you realize Rose is eating a bowl of leeches for dinner. The same leeches which we saw earlier sucking on Sam’s blood. And then there’s the strange practice they have of locking Rose in a room whenever Sam goes out hunting. Rose, we’re told, has a mysterious blood condition of some kind which necessitates all of these endeavors. But Sam is a little paranoid and controlling at times, and their particular style of social distancing seems less to do with any kind of virus and more to do with the dangers of being discovered. This quiet solitude comes to an abrupt end, however, when a young girl is caught in one of Sam’s traps. With a broken leg, she’s unable to move much, so Sam and Rose take her in and attempt to nurse her back to health, with disastrous consequences.

Horror fans will find a common thread shared between Rose: A Love Story and Trey Shults’ It Comes At Night. Both feature claustrophobic isolation and a building sense of dread in a world gone wrong. However, whereas the latter is fairly pacey, Rose: A Love Story is glacier slow by comparison. As its name suggests, there is a bigger emphasis on romance here. Sam (played by Matt Stokoe, who also wrote the script) has given up everything for Rose. He has carefully built a life for himself and his wife, and Sheridan and Skokoe seem much more interested in showing the viewer exactly how Sam has maintained that. Moments are teased out slowly, such as Rose’s condition and Sam’s fierce loyalty, and left to linger. What we’re seeing is, ultimately, a tale of devotion and the lengths we go to for love. There is nothing especially overt about Rose: A Love Story until its final moments. Instead, the horror aspect is allowed to slowly gain traction through an excellent use of sound design and a suitably grim cinematographic style which captures the nature of the couple’s isolation very well.

Sheridan’s slow, methodical approach won’t be for everyone. Rose: A Love Story is much more concerned with the trappings of relationships than it is the insidious circumstance of its lead characters. It is understated to a fault, but thankfully the acting lifts it up. While the movie seems more interested in Sam, it is Sophie Rundle as Rose who provides the most human moments. Rose feels constant guilt that her condition is forcing Sam into a life he doesn’t want, frequently offering him a way out, and Rundle plays this to perfection. She evokes the neighborly bonhomie of an ordinary English woman and is very easy to warm to and empathize with. Sam, on the other hand, is distant and tense, ensuring the viewer’s loyalty will almost certainly lie with the former.

In fact, there’s the feeling that Rose: A Love Story would have benefitted from more of a focus on its eponymous character, but unfortunately, she’s almost always side-lined in favor of Sam. For the most part, she is left to display creepily vague characteristics (such as her ability to move around without making the slightest sound, frightening Sam at one point when she walks upon him) which hint at a more dangerous truth than is being let on. Perhaps this is by design: the less we know of Rose and her condition, the better the horror builds as she remains an unknown entity. This is especially true when Amber (played with chavvy vigor by Olive Gray) shows up and befriends Rose. How much danger is she in? What exactly is Sam afraid that Rose will do?

After the slow build-up, some of the tension drains towards the climax. There is only so much teasing one can endure before losing interest and unfortunately, Sheridan walks that particular line very closely. As Amber insinuates herself more and more into the couple’s lives, the pacing suddenly rushes a little faster, eschewing the atmospheric tension of the first half in favor of a slightly contrived ending which doesn’t carry the emotional heft it intended to. It’s a well done moment, but on balance it might have been better to pick up the pace a little more throughout and stop the tension – and the viewers’ stamina – from flagging.

Rose: A Love Story is exactly what it says it is. It’s a love story, concerned more with the minutiae of a rocky relationship than with easy jump scares or gory bloodletting. It is a slow, ambiguous movie content to let its characters develop their relationship and is carried well by both Matt Stokoe and by Sophie Rundell in particular. Unfortunately, it suffers from over-indulgence and will likely test the patience of all but the most ardent of horror fans, and the pay-off is nowhere near satisfying enough for the build-up involved in getting there. When it works, however, Rose: A Love Story is a well-acted tale with a fresh take on an overdone myth.