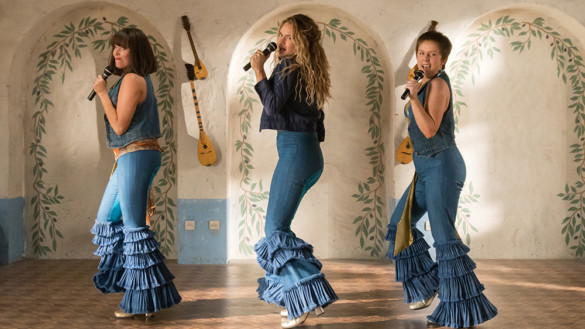 Synopsis: Five years after the events of Mamma Mia! (2008), Sophie learns about her mother’s past while pregnant herself.

Mamma Mia! Here We Go Again is the Slanket of movies. Nobody asked for it. Nobody needed it. Everybody made fun of it. Then Bruce Willis wore one on The David Letterman Show and suddenly it’s a Christmas bestseller and everybody realizes how warm, cozy, and amazing the Slanket actually is. (To be clear, in this analogy, Cher is Bruce Willis, showing the world that it actually does need this movie.)

Before I delve into the warm, cozy, amazingness of this movie, I feel I should disclose the cost of said warm fuzzies: if you’re looking for a movie with a sensical narrative, humor that lands, and characters with some subtlety, this movie is not for you. This is a movie where characters say things like, “Be still my beating vagina.” This is a movie that treats unexpected pregnancies and the resulting children like cure-all life Band-Aids. This is a movie in which 1979 was 25 years before 2018 and Cher is somehow Meryl Streep’s mother. This is a movie that strings along a loose narrative with the promise of the songs of ABBA, which barely relate to said loose narrative. Even with the double-layered half-sequel/half-prequel plot structure, we don’t learn anything new about any of these characters that we didn’t learn in the first movie and the expected mirror narrative that the trailers promised would carry the story along is barely present. This movie could have existed exclusively as a series of music videos of celebrities covering
ABBA songs and it would have made about as much narrative sense.

But, the loss of narrative and character development are just the price tag for this Slanket of a movie: it’s what you have to be willing to give up if you want to see the magic of an island-wide “Dancing Queen” dance party, a college graduation ceremony unsurreptitiously interrupted by a rendition of “When I Kissed the Teacher”, or Cher singing “Fernando”. Aside from one awfully choreographed number that sticks out like the awkward winking in the “Take a Chance on Me” music video (seriously, watch that music video), the choreography is amazingly ABBA in a somewhat stiff yet charming and incredibly fun way (though the singing, as in the first movie, leaves a bit to be desired).

Also, Cher! She’s glorious, but do I really need to tell you that? Amongst the returning cast, Amanda Seyfried again steals the show, though her role is rather minimized. All the returning cast bring the same energy and talent as in the first Mamma Mia!, so if you liked them then, you’ll like them now. The prequel cast was fairly well chosen, especially Lily James, who captures the carefree energy of Donna/Meryl Streep in such a way that makes her relatable and likeable despite the nonsensical nature of the events around her. I also particularly liked the energy of Jessica Keenan Wynn and Alexa Davies as Young Tanya and Young Rosie, respectively, though I couldn't stop asking myself, “Why on earth did neither of them change their hair or makeup since 1979?!”