Movie Review: ‘Set It Up’ is a fun and charming romantic-comedy 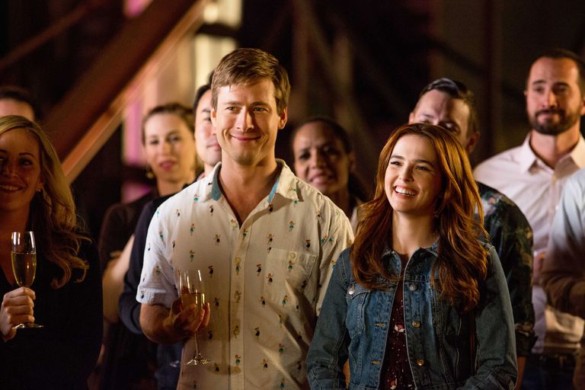 Set It Up is one of those movies you’ve probably glanced over on Netflix, made a mental note about Lucy Liu or Taye Diggs being in it, and then scrolled on by to binge watch a TV series with five or six seasons. Next time Set It Up appears in your “Watch This Next” queue, I suggest taking the time to do so. It’s an adorable romantic comedy (more emphasis on the comedy) that had me laughing out loud almost the entire movie. I am not a fan of chick flicks or the standard rom-coms but this seemed different. It doesn’t follow that “boy meets girl, they fall in love, they have a falling out, they make up and live happily ever after” format, so it’s refreshing in that sense.

Zoey Deutch is hilarious, I love her character and am excited to see what else she has coming out in the future. She plays Harper, an executive assistant to a big shot sports reporter Kirsten (Lucy Liu). I forgot how funny Lucy Liu is, the way she delivers some of her lines with a straight face is perfect.

Glen Powell is Harper’s counterpart. He plays Charlie, a long-time assistant to crazy executive Rick (Taye Diggs), located in the same building as Kirsten and Harper. Another positive addition to the movie is Pete Davidson. He is Duncan, Charlie’s best friend and roommate. Everything he says / does is funny, my only complaint is there wasn’t enough of him in this movie.

The basic plot is: Charlie and Harper are unhappy because their bosses are workaholics and because assistants have to do absolutely everything for them at any time, they work all hours and have no time for themselves. Harper and Charlie conspire to play matchmaker with their bosses so they will have more nights and weekends off. They plan to introduce them by convincing the maintenance man, Creepy Tim (played by the wonderful Tituss Burgess), to trap Kirsten and Rick in an elevator. Creepy Tim is easily bribed with succulents and loves to people watch using the security cameras. After the elevator stunt doesn’t go entirely to plan, the assistants trick their bosses into going to a Yankees game then bribe the Kiss Cam guy to put them on the jumbotron over and over until they finally kiss. This leads to the bosses casually dating and giving the assistants a sense of accomplishment and more free time. Mission accomplished. Now all they have to do is keep them together.

During the plotting and “setting up” Harper and Charlie become friends, but no weird romantic overtones or awkwardness. I was rooting for them to get together (I got sucked in) but they really didn’t introduce that possibility until the end. Charlie has a model girlfriend, Suze (hated by his roommate Duncan), and Harper has discovered Tinder and is trying to figure out dating. My only complaints about the movie are Taye Diggs character isn’t particularly likeable, there was definitely not enough Tituss Burgess, and the plot is kind of predictable, but I didn’t mind because it ended the way I wanted it to.

Set It Up is filled with crazy challenges for the assistants to overcome to keep their bosses happy and together, all while navigating their own personal problems. It’s a fun movie that’s easy to watch, so I recommend anyone with Netflix give it a try.