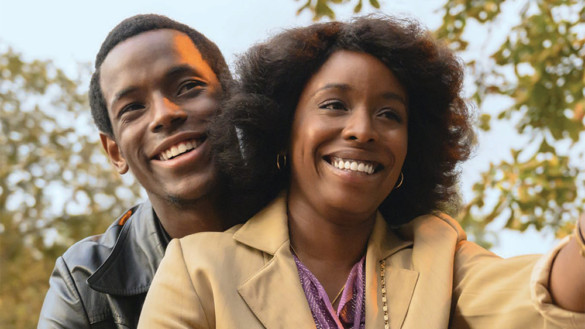 Synopsis: Produced as part of Steve McQueen’s “Small Axe,” an anthology of decades-spanning films that presents various lives in London’s West Indian community. Lovers Rock takes place over one night at a house party, focusing on the growing attraction between a woman and a brooding stranger.

Steve McQueen, acclaimed director of movies such as 12 Years a Slave, Hunger, Shame, and Widows, is back with a beautiful and intoxicating story developed during the 1980s. Lovers Rock is part of his anthology Small Axe, which tracks various lives in London’s West Indian community between the 1960s and mid-1980s.

In this brief story of just over 60 minutes, we follow an ethereal view that observes a group of Black young people in their element without any inhibitions. The movie focuses its attention on a Blues Party – the alternative for the Black community when they found themselves rejected from white nightclubs. Although this fact is always looming in the distance, the ambiance of the movie is one of joy and enjoyment.

As such, it is impossible not to feel a loving and appreciative perspective under Steve McQueen’s direction. The spectator can feel the love the director has for his characters, their rituals, and their screen presence. Everything acquires a beautiful essence, including the costumes, the light, the atmosphere, and the vibes inside the house in which most of the movie takes place.

This movie works as a celebration of Black lives. In a welcoming and refreshing instance, we get to appreciate Black people being carefree, enjoying the moment and each other. At first, the camera roams freely, focusing on the men and women getting ready for the night. We witness a loving and expectant atmosphere where people sing, prepare food and get ready with excitement for the night.

Later, it captures the rapture and festive mood that encircles everyone at the party. Soon enough, the story takes an interest in Martha, a young woman (Amarah-Jae St. Auburn) that meets Franklyn, a brooding stranger (Micheal Ward). First awkwardly, then seductively, they share the night through highs – an intense dance where the camera doesn’t shy away – and lows – an unexpected guest that puts Martha on the spot and the threat of witnessing a sexual assault – and finally get together to the other side.

The young cast is perfect and naturalistic. Newcomer Amarah-Jae St. Auburn has an impressive debut and shines as an expectant young lady looking for a good time. Micheal Ward is imposing and oh so handsome as this figure that says the right things and appears at the right moments. Nevertheless, the real highlight is Kedar Williams-Stirling, from Sex Education fame, who brings to life a disturbed character with the burden of resentment. His introduction brings a little shake to the previously perfect atmosphere.

Shabier Kirchner’s cinematography provides a beautiful perspective on the guests. Sometimes just focusing on couples for a long time, others roaming around the place abstractly, we are invited to an intimate and fun night where young people get together to be themselves and enjoy the night. Through extensive close-ups, we appreciate their clothes, hands, hairstyles, and faces. Sometimes we can even imagine the different scents in the house.

McQueen truly takes us back in time. Even though the movie mostly takes place inside a house, through the costumes, the hairstyles, and the attitudes, we go back to the 1980s. In addition, an enviable soundtrack – including a funny choreography of Carl Douglas’ Kung Fu Fighting – is the secret weapon of the movie.

Reggae music becomes another character. It is the channel of communication for these young people, whether they want to convey simple joy, attraction, spiritual connection, or emotional distress. Women become freer with every rhythm, sometimes even dictating what is played – highlighting a beautiful five-minute rendition of Silly Games by Janet Kay – while men break havoc and bring uncertainty through their volatility. These emotions come to a climax through a spontaneous but powerful moment of political togetherness.

Although the movie focuses on the highs and lows of a party, it also works as a reminder of the social context. In a refreshing move, the few white people that appear take the figure of threat and insecurity. This choice is welcomed because it is realistic. In addition, McQueen and Courttia Newland, his co-writer, don’t shy away from harsh and dark themes that are part of the everyday reality, including toxic masculinity, sexual assault, and the trauma of Black people. Nevertheless, the movie never loses its joyful celebration.

This story belongs to all Black people who shine through a humane and loving eye. Through Lovers Rock, we get to appreciate every beautiful soul in their environment and in a place where they genuinely feel seen and comfortable. Here they are sensual and present, dancing and singing away at the rhythm of their emotions.