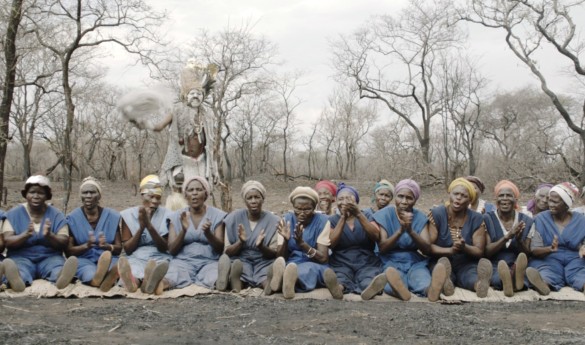 When you think of a Criterion movie, what do you think of?  Probably specific directors, right? That would explain how Criterion Channel tends to group its films on the service. In many circumstances, many films by one director are organized into collections. But dig deeper, what does that director look like? If we are honest, it is probably a white guy, maybe with a thick accent. There is undoubtedly some overrepresentation both in Criterion, and anywhere else you look for movies. And this is why it is important to highlight both female directors and directors of color. Lucky for us, this week’s flick features both. That movie is I Am Not A Witch, directed by Rungano Nyoni.

Many things set this apart from your standard Criterion fare. Not only is it directed by a Black woman, but it is also quite recent, released in 2017. This film is her feature debut, and what a debut it ended up being. Like any other first time director, there are a few moments that make that clear, but with Nyoni, they are few and far between. She seems to have an innate understanding of not only the visual art of film, but the power of sound, or lack thereof.

I Am Not A Witch is the story of Shula (Margaret Mulubwa), a young, quiet, unassuming girl who’s accused of being a witch simply for being serious and refusing to answer when accused. This brings up something else that Nyoni is accomplished at, which is the mixing of tone. That earlier description sounds very serious, even scary. And it is. But it is also surprisingly funny, taking its time to mock those in power. Mr. Banda (Henry B.J. Phiri) is the government official who responds to the accusation. He also happens to be a witch doctor, because of course, he is. His portrayal is equal parts terrifying dictator and buffoon. Both of these portrayals are truly unbelievable, which is no small feat.

His appearance as the witch doctor is an excellent example of this dichotomy. As he slowly removes his clothes to prove himself, it begins as comical. But then, as we become aware that he is ultimately serious (and slaughters a chicken to determine whether she is a witch or not), the entire scene takes on a different pallor. There is some use of silence, although designed to make the audience uncomfortable, fall a little flat. However, the choice to not show the actual slaughter but instead show the effect as the blood is spilled over her feet is more impactful than any horror that could be shown. 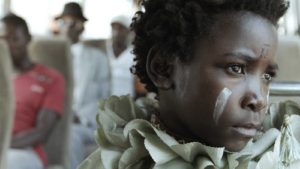 Sula, upon being allowed to join a community of witches, who are tied to the earth by ribbons (so they don’t fly away, of course), is faced with a choice. She can be a witch or a goat. Now, this sounds silly, and it partially is. But the way that Nyoni brings this choice back around near the climax of the movie makes it both moving and terribly sad as we realize what this innocent child has been through in the short runtime. Additionally, Nyoni’s decision to offer precious little dialogue from Shula (even having her name be chosen by the other “witches”), we are allowed to imprint on her and never leave her side as an audience. Most every moment with her is one where she is unsure of herself and frightened of what comes next. Yes, she is allowed to leave what amounts to a labor camp,  but at least there she knew what to expect. Being shipped around the countryside with Mr. Banda opens up a new world to Shula. A new horrifying world filled with bumps and responsibility too great for anyone, let alone a child.

Visually, I Am Not A Witch is absolutely stunning. The cinematography, from David Gallego, creates not only beautiful images but, strangely, a sense of time. Some of this is also Nyoni’s decision to stretch scenes almost to a breaking point. But there is great reward in coming to the edge of that precipice. In particular, the paired visuals of the witches’ ribbons in two distinct scenes. Both are gorgeous, but both provide completely different contexts for these women. It also provides an ambiguous ending that will likely leave you questioning the experience long after the credits roll.

Criterion certainly has work to do in terms of non-white male directors. But I Am Not A Witch is an absolute gem. Rungano Nyoni is undoubtedly a young talented director who has a great talent to offer. If you are like me, you will be anxiously awaiting her next project. A cursory look at her IMDb page shows no information, but hopefully, being included on the Criterion Channel will allow her to make another diamond in the rough.

Join us next week as we watch the revisionist western, Devil’s Doorway