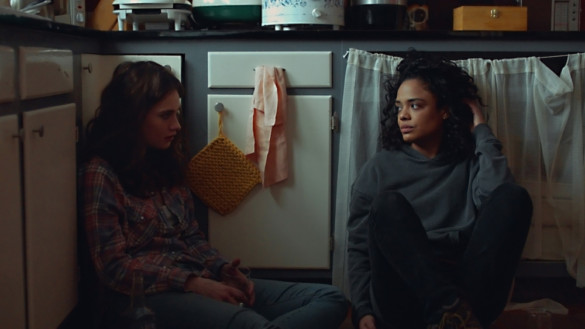 Synopsis: A modern Western about two sisters who work outside the law to better their lives.

Little Woods begins and ends with the same shot. Everything that happens between these moments completely adds new layers of context and meaning. We don’t understand the opening shot since we haven’t gained that context yet. But the beauty of this film is that, at the closing shot once we do have all that context, we still don’t quite understand it all.

This film, the debut feature from director Nia DaCosta, follows two sisters – Ollie (Tessa Thompson) and Deb (Lily James). Ollie – whose full name is Oleander is on probation due to past drug offenses as the film begins. She is slowly rebuilding her life, but her demons remain.

Deb is a single mother who has recently learned she is pregnant again. The man who fathered both children (played by James Badge Dale), is not in the picture. He is more dependable in Ollie’s drug trade than he is as a father.

Sometime before the film’s plot begins, we learn that the sisters lost their mother. The weight of that fresh grief hangs over the film. As the story continues, we get the growing feeling that these cannot catch a break.

The film does a fantastic job of setting the stakes for these characters at the beginning. Even if we disagree with their methods, we understand why they are doing what they’re doing. That’s important for a story, and this one does it marvelously.

Moral ambiguity is one of the key devices employed by this film. Just as we do, these characters feel that they cannot catch a break and it leads them to increasingly desperate choices. This is a story for our modern social divisions. In it you have border crossings and a character wrestling with a decision about an abortion. Drug offenses are depicted, as are other illegal dealings. But the ambiguity comes from the impetus for all this. How far would you go for your family?

And there lies the rub. In our culture, provision for family is held up as arguably the highest ideal. If your child, especially, is in danger, most would go to great lengths to protect them. And yet, from the outside, many view characters like Ollie and Deb as common criminals or (as protesters in the film imply) murderers. What this film does is invite you to set aside the policy talking points and see these people. At the end, you still may not agree with their choices, but at least you’ve seen them.

Tessa Thompson, who also is an executive producer on the film, dominates with her acting. She is quickly carving out an impressive track record of performances. She always brings an extra something to her roles. Here, she carries the weight of the film’s moral ambiguity. There are no easy answers because she asks no easy questions of her character.

The film is as sparse as its North Dakota setting. For some this may make it a difficult watch. I wouldn’t say that its pacing is slow, as the stakes are constantly being raised. But there certainly are moments of silent consideration by these characters. DaCosta does a fantastic job – especially as a debut director – at finding the opportunities for cinematic moments in this sparse story. Even when the film does slow down, it never comes to a halt.

I hadn’t read anything about Little Woods before watching it. That’s often the better way to watch a film, I think. I was swept away by the craft and the acting on display, and the story had me thinking long after the film was over. Finding diamonds in the rough like this is one of the great joys of movie watching.