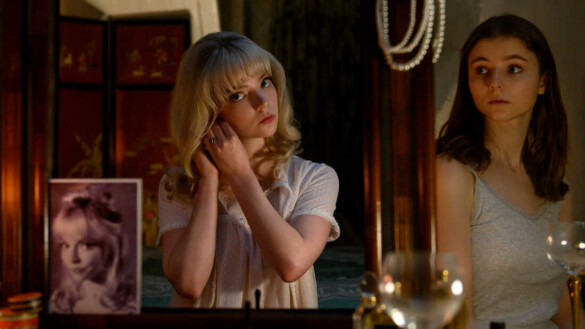 Synopsis: An aspiring fashion designer is mysteriously able to enter the 1960s where she encounters a dazzling wannabe singer. But the glamour is not all it appears to be and the dreams of the past start to crack and splinter into something darker.

For almost two decades, the cult of Edgar Wright has continued to grow. The famed director and cinephile is a man after our hearts. He loves pulpy crime flicks, horror homage, and the organic comedic set-ups in his worlds. After breaking out on television, his Cornetta trilogy and Baby Driver films endeared him to the general public. His very public divorce from Marvel over Ant-Man further earned him street cred amongst the filmgoing community. Wright’s ascension as a figure within cinephile circles cannot be ignored. From Letterboxd checklists to frequent podcast appearances, Wright has ingrained himself into the community like Scorsese or Del Toro before him. However, inconsistent films have prevented him from becoming a household name.

Hot off the tenth anniversary of his true masterpiece, Scott Pilgrim vs. the World, Wright returned to theaters with a thriller set in the fashion world. His latest, Last Night in Soho, is a triumph of craft and visuals. Sadly, the De Palma and Argento homages can only take us so far. Instead, Soho comes crashing down in the final act, thanks to a surprising reliance on CGI and poor storytelling. In addition, Wright continues his struggles with writing women, and for Last Night in Soho, this proves to be a fatal blow.

Picking up in modern London, Last Night in Soho focuses on burgeoning fashion student Eloise (Thomasin Mackenzie). Eloise earns acceptance into London’s premier fashion school but quickly finds herself an outsider. Eloise opts to rent a room off-campus from the kind and elderly Ms. Collins (Dianna Rigg).  As she sleeps, she’s transported into the body of Sandie (Anya Taylor-Joy), a girl finding her way in the cabaret scene of the 1960s. Eloise begins to lose her grip on reality, with the ghosts of Sandie’s past haunting her in the present.

Wright’s ability to draw from films of his youth and genre favorites remains unparalleled. At any point, one can see the influence of Antonioni’s Blow-Up or Powell’s Peeping Tom on the edges of the screen. The menace and danger of present-day London overwhelm Eloise quickly. An over-eager and dangerous cabbie scares her from her first moments in town. Subsequent interactions with men and her classmates only heighten her anxiety. Wright traps her in a concrete jungle and the bland aesthetics of dorm life, a stark contrast from the highly decorated cottage where we meet her in the film’s intro. Despite attending fashion school, Wright zaps her environment of any taste or individuality that would shine through. Instead, he surrounds her with vapid wannabes and future “influencers.”

Expertly, Wright contrasts this with the brilliant neon and bright lights of the 1965 Soho district (dated with a giant poster of Thunderball). Here, bright colors dominate the clubs and dance floors. Music rockets off the walls and the bustle of the city helps the world come to life. The lively soundscape and visual aesthetics transport us and enrapture Eloise. Unfortunately, her nostalgic leanings become an outright obsession. She quickly withdraws from her friends (Michael Ajao) and family (Rita Tushingham) in favor of her fantasy world.

Eloise’s love of the 1960s causes her to lose touch on reality, a rather unsubtle and clumsy metaphor. Wright’s critique of nostalgia in Last Night in Soho rings hollow. Wright might be one of the few directors able to get original films off the ground, but his movies brim with references to days past. As a director that has openly trafficked in nostalgia, one may read his sudden change as growth and maturity as a filmmaker. Yet, the ending of the film throws that reading out the window.

Additionally, Wright attempts to comment on current gender dynamics in a stunning unsuccessful narrative. It is impossible to discuss the failures of this film without spoilers. Still, the problems begin to cascade on themselves in the second and third acts, so please skip the following three paragraphs if you wish to avoid them.

Earlier in the 1960s, a very obvious cameo from Sam Chaflin begins to unravel the film. While Eloise has zeroed in on a modern-day creep, Lindsay (Terrence Stamp), as an alter ego of 1960s pimp Jack (Matt Smith), Chaflin’s appearance immediately undercuts the tension. Casting a known presence in the role immediately signaled importance to the part. When she finally confronts Lindsay, she discovers he was a police officer, not a pimp. The reveal creates distrust in our protagonist, a dangerous game when discussing sexual assaults and those who are victims of it. This failed twist leaves only one other legacy actor in the film, immediately undercutting any suspense around Rigg’s Ms. Collins.

Once Eloise chooses to leave London, the Jenga tower crumbles. Not only is it revealed that Sandie and Ms. Collins are one-in-the-same, but that she has killed all the men who sexually assaulted, including Jack. However, rather than being seen as a woman who took power back into her own hands, the film then turns Sandie/Ms. Collins into a ravenous villain.

The ghosts suddenly become pitiful men asking for help, and while Eloise does not help them, the narrative is already become damaged beyond repair. The randomly sympathetic/pathetic ghosts are defanged even further, and the victim of assault has become the monster of our story. This choice is both offensive and an extremely dangerous narrative to weave into this movie. Given that Eloise’s blind accusations towards Lindsay proved false, one may also question any perceived impropriety from other men in the film. It becomes a slippery slope moment, and the tone-deaf sequence prevents Soho from holding any moral high ground.

While Soho struggles with its storytelling and metaphor, the craft team delivers some of the year’s best set pieces and sequences. Once again, Julian Slater continues his collaborations with Wright to stunning success. His ability to build and develop soundscapes creates a musicality in Wright’s films. He remains at the absolute top of his game here. Slater’s role cannot be understated here, just as his contribution was integral to the success of Baby Driver before.

Cinematographer Chung-hoon Chung develops stunning pictures throughout the film. The use of light, especially blues and reds, serves Soho’s metaphors and homages while providing a unique visual palette. It’s fair to say that no film in 2021 looks like Last Night in Soho, and that is due to his outstanding work. The use of mirrors and the tricky camera placements only make the cinematography stand out more.

More superlatives need to go to production designer Marcus Rowland and art director Tim Blake, who expertly craft set piece after set piece. The vast differences in environments, especially inside of pubs and clubs, helps create emersion. Even in Eloise’s dreams, they add small touches that ground the film in its setting.

Perhaps most frustrating from Wright’s visual palette are the downright poor visual effects. Ghosts populate the film, and at times they work to perfection. However, this almost always comes from their uses as physical beings seen in mirrors or room corners. As Eloise descends further into madness, these ghosts become shadowy CG blobs. While the metaphor of nameless, faceless disgusting men is obvious, these creatures are the epitome of the CG sludge.

When Del Toro moved from the practical effects of Pan’s Labyrinth to the CG-heavy effects of Crimson Peak, the difference was palpable. Wright runs into the same issues here. While Covid might have been to blame, initial photography concluded in August of 2019. Unlike Del Toro, these creatures are not scary, do not work visually, and negatively stand out in an immaculately crafted world.

Last Night in Soho will find an audience on home video, if only because Wright’s fans will find highlights to celebrate. The performances from McKenzie and Taylor-Joy are superb, and the crafts are gorgeous. However, it is a shame that Wright’s storytelling falters, and his choices leave the film with almost no tension whatsoever.