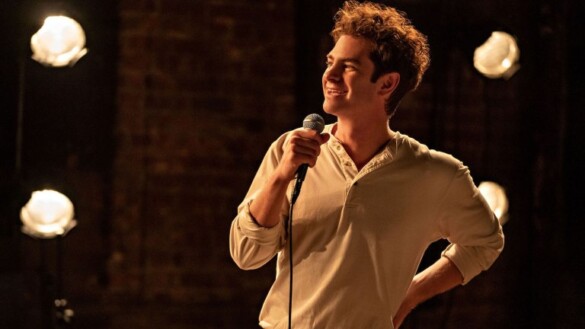 Synopsis: On the cusp of his 30th birthday, a promising young theatre composer navigates love, friendship, and the pressures of life as an artist in New York City.

Over the past five years, Lin-Manuel Miranda has become a household name for musical lovers and theatre fans. After taking the world by storm with his theatre production of Hamilton: The Musical – something the public could access from their television screens when a recording of the production was put onto Disney+ last year – Miranda has cemented his work into film with his musical talents being showcased in Moana, as well as his first theatre show In the Heights being made into a feature film. With being such a big fan of the work that Miranda has done over the past few years, and with In the Heights being one of my top films of the year so far, I ended up feeling disappointed with his feature directorial debut, Tick, Tick… Boom!

This is not to say that the film is bad because, overall, there is plenty to enjoy with this musical. The main praise from critics and fans alike has been directed to Andrew Garfield, and it is clear to see why. Garfield gives the performance of his career as Jonathan Larson, a composer, and playwright who penned Rent: The Musical. Not only does he shine in the many musical numbers he has, but it is his presence and range of emotions that help guide the story and illustrate the struggles that Larson went through in his short lifetime.

As subject matters for biopics go, Jonathan Larson is certainly one that is worthy of a feature film. Whilst many of us know the work that he did, especially on Rent, there are plenty of things we did not know about the man behind it all. What he had to go through and what he had to see with his friends around him, hitting on subject matters such as the AIDS crisis, was tragic and this film handled those moments especially well. It is easy to see why a film like this has resonated with so many people.

There is one song in this film that stands out from the rest, and it is ‘Sunday’. The arrangement of this song not only has a ‘who’s who’ list of cameos from Broadway – including a few from Hamilton: The Musical – but actually blends reality and fiction in the way most movie musicals aim to achieve. The staging feels dynamic as the diner that Larson works in opens up and turns into a stage, with everyone dancing and singing in a way that is infectious.

Unfortunately, I struggled to connect to the rest of the songs on the tracklist. Whilst others may be praising ‘30/90’ and ‘Therapy’, they have already left my head and the film left me with no intention of putting the soundtrack on my Spotify. Sure, they were performed well by the cast, with Alexandra Shipp and Vanessa Hudgens adding some great vocal performances to the songs, but they didn’t feel dynamic. Part of that also comes from the staging of the songs, seeming as if it was taken directly from a stage production.

One of the aspects that I was most looking forward to heading into the film was the staging and cinematography. Despite being a recording of a stage production, Hamilton: The Musical had some fantastic use of cinematography, and Miranda’s attention to detail with the staging is what makes the show incredible to this day. Additionally, the cinematographer behind this film Alice Brooks also worked on In the Heights, which excels in visual style and gorgeous cinematography. Whether it was the pairing of Miranda and Brooks or a clash of visions, sadly Tick, Tick… Boom! looks flat and washed out in most scenes, with even the dream sequences lacking a pop of color and the musical magic that would help enhance the story.

Perhaps I had higher expectations than most entering Tick, Tick… Boom! because of my love for Lin-Manuel Miranda and everything he has done before this. Maybe as a musical fan, I expected to love this considering I was sold on the concept on paper. Perhaps seeing the high praise this film got from NYFF and the constant love for the music set my expectations even higher than they needed to be. Whatever the case is, I would still say that the film is good and will connect with so many people, but it just wasn’t what I was looking for. If anything, I think the material would work better as a stage production, purely letting Jonathan Larson shine with a single spotlight. I would love to see Garfield play the role again soon if that is the case.