Movie Review (Sundance): ‘In the Earth’ is a Fun Horror Flick, Even If It’s Over-Edited 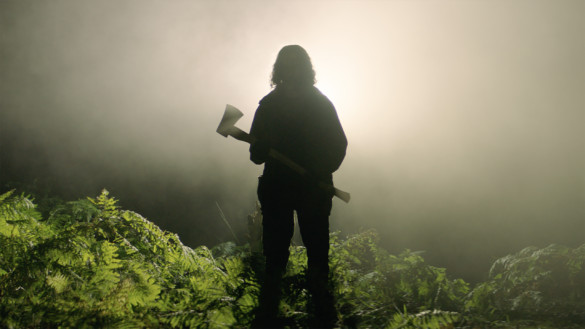 Synopsis: As a deadly virus ravages the world, Dr. Martin Lowery and park scout Alma embark on a mission to reach test site ATU327A, a research hub deep in the Arboreal Forest. When they run into Zach, a man living off the grid, they discover that his intentions aren’t exactly as they seem.

Contrary to many other people in the film community, I was positive about Ben Wheatley’s previous film, Rebecca. If there is something about Ben Wheatley, he has an eye for style and script-writing, being able to sense a strong plot. This is the same with In the Earth as this is another strong film from Wheatley.

Written and filmed during the pandemic in the UK, Wheatley makes a choice to have COVID-19 be a part of the film. This is not a pandemic film in any way, other than the ways that characters interact and how the virus impacts the research facility. It is a nice touch of reality within the film without ever being too distracting from the main premise. It also helped get production going, as this was one of the first films to shoot during the lockdown in the UK, meaning that it would be easier to keep social distancing rules and making sure all of the cast and crew were safe.

Ben Wheatley is a fantastic screenwriter, and this film proves how effectively he can escalate a situation. For how simple the concept is for this film, many filmmakers would have been drawn to this project as a 30-minute short. However, Wheatley is able to make this a 100+ minute thriller and still have it work, due to the layers within this story. Whilst I tend to dislike mentions of the supernatural in horror films like this, the way it was written in was so well done that I was invested in the lore.

The reason the horror is so well done in this film is down to the two leading performances from Joel Fry and Ellora Torchia. Both actors are given an incredible script to work with, but a challenging one. This is a horrifying story and their characters go through thick and thin, but it is always believable. Unlike some horror films, in which the characters are poorly written and get themselves in bad situations, the leading characters are actually quite smart. Every decision that they make in this film feels like a smart move as they are just being tortured more and more throughout this night.

It is important to note that this is a horror film that focuses on the gruesome shots and close-ups, rather than the psychological genre that has gained popularity recently. The visual effects are so well done, especially for a film that was made during the pandemic. It is a warning though that if you are uncomfortable watching a film that contains body mutilation, blood, and severe injuries, then this film is not for you. If you are like me and have a thrill with these types of horror films and admire the craft that goes into them, then this is the film for you.

As great as the script and performances are in this film, the editing style that Ben Wheatley uses can be extremely distracting. Capturing the essence of an early 2000s music video, there are moments that the film benefits from this stylistic choice. However, there are numerous uses of strobe lighting which I found to be distracting, as well as some overlays used that felt like a random drug trip within this dark field during a chase sequence. Whilst I appreciate that Wheatley had fun within these sequences to experiment, the editing didn’t always land and would sometimes take away from the story.

This is a movie that I would have loved to have seen in a large crowd. With Hollywood heading in the direction of the psychological horror, it is nice to see this gorefest from Wheatley and to just have fun with it. Even with some of the editing choices, it is easy to fall into the film’s incredible script and fantastic performances, leading us on this torturous journey. If you can handle the horror, this is an easy recommendation.