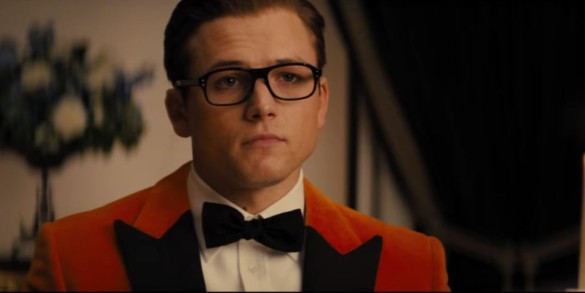 Synopsis: When their headquarters are destroyed and the world is held hostage, the Kingsman’s journey leads them to the U.S where they discover an allied spy organization known as Statesman. These two elite secret organizations must band together to defeat a common enemy.

Matthew Vaughn is one the very scarce people amongst the writer/directors working in the industry today that lacks any fear of being seen as an auteur only in the category of inflated, stylized action that since his debut, he’s been known to trademark. Kingsman: The Golden Circle is another instance of this. While it does feel oddly reminiscent to the first in terms of narrative structure, it’s definitely another wildly engaging incarnation into the Kingsman universe.

Whereas most movies go wrong in the spy genre, Kingsman does right. What made 2015’s Kingsman: The Secret Service so fresh and modern, was the extravagant use of violence coinciding with the persistent Matthew Vaughn-isms that made it the contemporary, commercial flourish we’ve now seen it as. So it’s no surprise to see that within the first few minutes of The Golden Circle, Vaughn immediately transports you into a car chase. Although crowd-pleasing, the dilemma is how it just resides as a makeshift. It carries the same content as the first, but is choreographed far too much in shambles than its predecessor ever had. It’s as unenthused as it is heart-pounding but it feels like a fuse burning on both ends. Luckily enough, by the end of the resolution you should be able to forget all about the opening scene.

Although the first Kingsman was capable of deceiving audiences with Colin Firth and Samuel L. Jackson who were mainly being marketed as the protagonist and antagonist, it was ultimately Taron Egerton who brought a superior aspect of the movie’s charisma. That’s also apparent here. Not only are we given the characters we missed from the beginning (Eggsy, Harry, Merlin), but we’re also given the introductory to new personas. Channing Tatum, Pedro Pascal, Jeff Bridges and Halle Berry all feature compelling takes on these new characters and to be frank, by the midway point of the film you kind of get an idea on which direction each person will go in. But as the film nears the final showdown, that idea begins to fizzle out quickly. There’s not a whole lot of exploration shown for this new organization known as Statesman, which is a bit sad to think because of all the ideas they could’ve used to commence this grand, intriguing setting that would compliment with the newer faces.

At this point in Hollywood, Vaughn is well-known for his blatantly obnoxious style of filming action sequences. Although it hasn’t really thrived in all of his projects, the Kingsman series is the one where he should be proud of that it reaches its full potential. Excluding the opening scene, the last sequence of the movie where we’ve reached the final culmination from all of the previous build up has some of the most effusive and comical action I’ve seen from a spy film in quite some time. Instilled with an absurd plethora of wacky new gadgets from both Kingsman and Statesman, and you’ve got yourself one entertaining film.

Despite The Golden Circle essentially being the exact same as The Secret Service, some of their faults differ quite unexpectedly. Even if they’re pretty much identical in terms of storytelling techniques, by far the most substantial difference is Julianne Moore’s inability to wear the shoes of a dominate villain. This shouldn’t all be blamed on Moore however. The rising action and an eventual part of the climax seems incredibly pressured to be set in motion. It’s like Vaughn wasn’t entirely sure how he wanted to expand upon the finale and just proceeded without a complete plan mapped out. It also doesn’t benefit when your antagonists scheme is way too far fetched and insufficient, and merely just works for the films sake. Not to mention the continually forced emotional development for the main characters. Although it’s such a low number of flaws, it heavily damages the film exponentially.

Overall, Kingsman: The Golden Circle is a fascinating and overly excessive kinetic movie filled to the brim with enthusiastic performances and solid action along with its set pieces. Even if it feels like familiar water because it is indeed a carbon copy of the first, it’s still a notable outing for Matthew Vaughn. Worthy of a watch but don’t set any expectations too high.