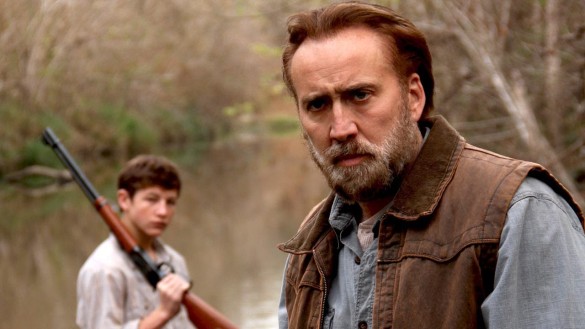 Synopsis: An ex-con, who is the unlikeliest of role models, meets a 15-year-old boy and is faced with the choice of redemption or ruin.

DIRECTION
Joe, is directed by David Gordon Green and he does a tremendous job of making us care about Joe. The first half of Joe, seems like the relationship is forced between our main characters, Joe and Gary, almost making it less impactful. Green decides to insert details in the first half that will eventually come together in the last act. As you watch the film most of the narrative seems very choppy and there are several scenes that are a waste of time. One scene that was out of place was when Joe travels to his local brothel…goes home to gets his dog…goes back to brothel…dog kills brothel’s dog…Joe hires prostitute…Joe leaves with Dog. What Green does at times is very interesting, at least.

SCRIPT
On the surface Joe looks very dull and seems very Mud-like, it even stars the same guy Tye Sheridan. Joe (Nicholas Cage) is an ex-con whose temper is worse than a pre-teen banned from social media, and one who loves cigarettes and prostitutes. Joe has a rather usual job as his business entails poisoning trees so that lumber companies can kill them off, clear the land and plant new, more profitable timber in its place. One day at work a young man comes in requesting work for his dad and himself. The young man we learned is named Gary (Tye Sheridan), and after Joe initially obliged he later takes Gary under his wing and what becomes of their relationship is a joy to watch. Gary Jones is a 15-year old who has an imploding relationship with his father Wade (Gary Poulter). Wade is drunk pretty much the entire film and it is hard to watch the abusive he unleashes on Gary in the film. Despite everything Gary is a hard-working guy who sticks around to help support his mother and sister. Once Gary begins to work with Joe, he finds solace away from his troubled home-life. Sheridan not only has to be a punching bag to his father he also must be a normal 15-year old and through his emotions you can see the vast differences and it’s refreshing to see an actor so young be able to embody this.

PERFORMANCES
I usually love to watch this types of movies because I have fun tearing them apart like the Seahawks did the Broncos. However, I found myself enjoying Joe, because of the very strong performances of Nicolas Cage and Tye Sheridan. Cage has been in the business for a while so I know he has it in him to play great roles but for some odd reason playing Johnny Blaze in both Ghost Rider movies was not the best idea. Cage seen here as the titular character Joe, shows us his best role yet. Joe was the perfect role for Cage because Joe has a little bit of a bad side and seems very reserved, both roles that Cage has played successfully before. Cage also has proven that he has terrific chemistry with younger talent and that same bond continues with Sheridan.

SCORE
Nothing really exciting here but the score delivers a nice mix of very mellow and slowed down repetitions in several scenes to help set the tone. Jeff McIlwain has done some nice work in the past and what he does here is more background, but very serviceable. Not bad at all.

FINAL THOUGHTS
This is all I will say about Joe because you simply need to go and check it out for yourself as both Cage and Sheridan deliver A+ roles. So yea, go see Joe besides I don’t think I’ve ever steered you wrong before.