Movie Review: Heaven Is For Real 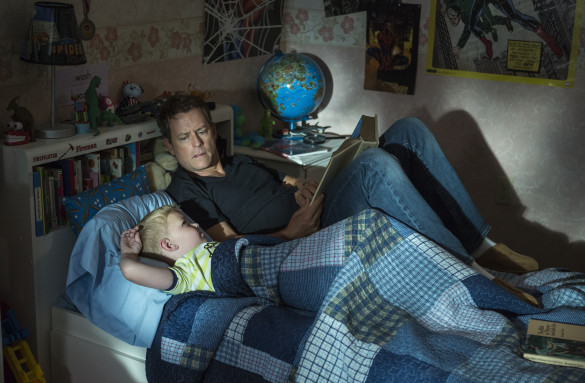 Synopsis: A small-town father must find the courage and conviction to share his son’s extraordinary, life-changing experience with the world.

DIRECTION
Randall Wallace has done some fine work in the past, the dude wrote Braveheart for crying out loud, but this material seemed pretty different for him. However, I like Wallace’s resume more than most probably, which gave me hope going in. Wallace does a nice job of keeping this film small, as most of it takes place in a small Nebraska town, and you feel that big time. My biggest question going is was how Wallace was going to handle, not just the religiosity, but how to keep it from feeling generic. Well Wallace’s story is a tale of two halves. The first half is full of cliche’s and stereotypes, which is distracting and uncomfortable. I’m still waiting on a film that shows Christianity in a realistic, 2014-type fashion. Wallace also creates a film that doesn’t know what it wants to be. Some scenes are dramatic and full of depth, while others feel like a week night comedy TV show and none of it blended well. That being said, the second half is much more focused and Wallace rearranges some scenes that were absolute perfect direction choices. If you can forgive the silly comedic scenes and the cliche’s, there some interesting stuff here.

SCRIPT
The script, while it could of been more focused, goes to some very interesting places. The marketing for this film sells it as a story about a little boy who goes to heaven and see some interesting things his family can’t explain. Well, while that is there, it certainly isn’t about that. The film is actually about Todd Burpo (Greg Kinnear), the father of Colton Burpo (Connor Corum), and how he deals with all of these strange things happening around him. As mentioned above, Colton gets close to death and after a surgery saves his life, he goes on to tell his dad about going to Heaven, seeing Jesus and other things that just throw Todd into a frenzy. Colton is adorable and while his experience is fascinating, the film mostly explores Todd’s reaction and how faith is tested when realities are pushed to the surface. When push comes to shove, are you going to believe what you preach to your children? Are Heaven and Hell real places and if so, what does that mean? We see Todd, the pastor of a local church, deal with these questions and doubts that start to rise. The supporting characters in the second half of the film are used wonderfully as well to further these notions and test whether your faith is what you say it is or is it just a coping mechanism. These themes brought some real meat to the story and were explored well, despite a few things here and there.

PERFORMANCES
Connor Corum, who plays Colton, is adorable and does a fine job for a little kid who is having to explain all of these crazy things he saw. He’s believable and shows just how innocent he really is. And as I explained above, the film isn’t so much about him as much as his character’s father, so he’s not in the film a ton, but when he is, he’s captivating. Greg Kinnear and Kelly Reilly are fantastic as well and push this film to a level that most “Christian” films are never able to get to. Kinnear especially is great, but his scenes with Reilly toward the end of the film are really strong. Kinnear also has some very strong scenes with Margo Martindale who was phenomenal as well. Martindale was very funny at times, as you can expect, but also dealing with her own conviction, which she sells beautifully. Kinnear and Martindale have a scene at a cemetery in the third act that absolutely defines the entire film. Thomas Haden Church was awesome and that’s really all I need to say. He was easily one of the best parts of the film. With a film like this and the budget they had, there’s a very clear distinction between these actors and the non-experienced supporting actors. It was a little distracting but nothing ever serious.

SCORE
The score was done by Nick Glennie-Smith and it’s mostly forgetable. It was just some background noise to fill those silent spaces, but it’s nothing that is stand out worthy or notable. And in a film like this, that is okay with me.

FINAL THOUGHTS
This film deals with Christianity in some unique ways and explores questions that are worth bring up, especially within this context. Some of it is contradictory to the Bible, but the question of whether or not Heaven is real, is a deep question to ask someone. And even more so, what about your loved ones who have passed away? Are they there? Well that depends on what you believe but it’s a question that many people grapple with and that part of this film was great. The beginning is rough and you have to forgive it’s cliches and cheesy scenes, but if you can, the third act is amazing.